Chris, a player from Ohio, opted to hold off the encroaching zombie horde during Nation vs Zombies, in what I like to call pulling a “Boromir” (I’m sure other people do it too, but that’s not important). This, is his story.

I was fortunate enough to record this, and moments like THIS are why I sometimes have to step back and carry the camera, not the blaster. Tough job, someone’s gotta do it. I still have the main video to work on, so more highlights to come!

Nation Vs Zombies: where 400-500 blaster/undead enthusiasts got together and had a good time of it. Next year: Athens, Ohio.

500 Players Descend on Missouri State University for Nation Vs Zombies: An Invitational
Vas The Stampede

600 Registered. Approximately 400-500 players. That was this past weekend at Nation Vs Zombies… the first (I think?) attempted event of this scale where players from all over North America (and beyond) were invited to come to Missouri State University and play a game of “Human Vs Zombies”, mixing roleplay gaming elements, tag, and Nerf/toy blaster games in a two-day test of survival, planning, and cardio. More on the game later, but for now enjoy the gallery posted above!

Heading to Nation Vs Zombies this weekend! Not as player, but in a press/media capacity, I leave tomorrow for what looks to be an HvZ of a different scale. They aim to have players from every corner of the United States (and what looks to be the continent, given players from Canada seem to be arriving as well) joining in the fight against the zombie infection. If you’re going, drop a comment! I’ll be doing interviews, taking pics, talking to players, and seeing how the action goes down.

Also make sure to check the action on my social:

Also running for Open Play, The Thunderdome -I’ve checked out the arenas in Colorado and Detroit, this will be a little different, but all roads lead to flinging foam.

***NERF MEGA RotoFury Blaster*** NEW FOR 2015!
(Ages 8 years & up/Approx. Retail Price: $34.99/Available: Fall 2015)
By: Vas The Stampede
“Supersize your NERF battles and dominate the field with the highest capacity MEGA blaster ever! The MEGA RotoFury blaster gives you the option of firing one MEGA Whistler Dart at a time, or slam firing a steady stream of ten darts in a row. Hear the darts whistle as they fly through the air and hit targets up to 90 feet away.  Includes 10 MEGA Whistler Darts. Available at most major retailers nationwide and HasbroToyShop.com.”

Thanks to Nerf for the image! There you have it, their Raider/Rampage gone MEGA. 10 shots. Single fire or slam. I don’t see a way to attach a stock, (which I liked using on a Rampage) buuuut as always, I need to see this blaster in person before I can really comment on it. But I can admit I’m a bit excited to shoot that much Mega ammo with slamfire. 2015 is looking pretty good!

What this tells me is that large ammo rules in my game groups are getting more and more interesting with every extension of the Mega line. What I wouldn’t give though to see something like this that shoots Demolisher missiles.

Or, can I just hope that a big release this year is going to be a full auto Mega blaster? A guy can dream.

Still working on my 2014 roundup, stay tuned! It’ll coincide with the roundup of brands I’ll be visiting with at New York Toy Fair this year. 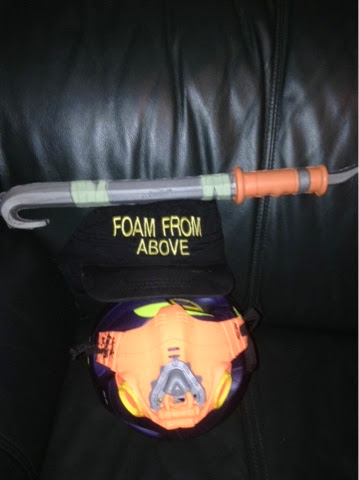 It is a bit softer than I would maybe like but I also enjoyed Half Life (Gordon Freeman!!) a lot, so crowbars are kind of a thing for me. The mask that it comes with is pretty hilarious but I wouldn’t run around for extended periods of time wearing it. Also, this SHOULD go without saying, but it is sized for a child, adults may not find this as comfy like the iron man mask. 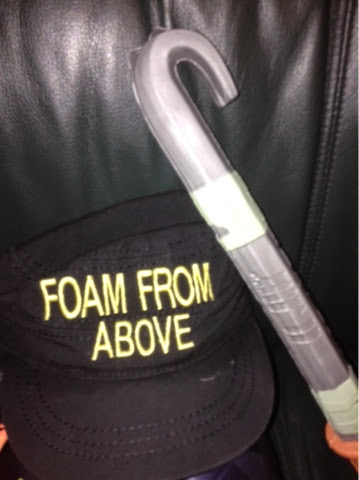 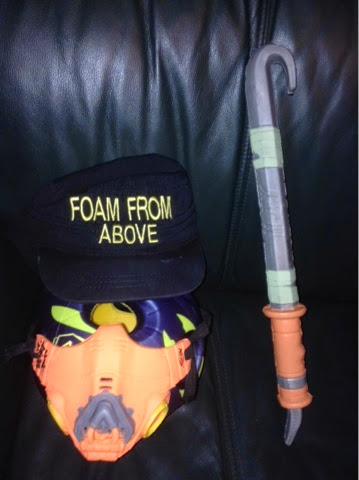 (Pics were quickly snapped w/ my iPod touch, so sue me.)
I don’t know a lot about LARP so I can’t speak for utility in games like that but maybe some of you other players out there can make these work. It fits the “zombie strike” world that Nerf is building. Now I was pretty disappointed in the first launch with the machete, but Perpetual Play has really caught me with their weapon and dart storage, the z bombz, and now some of the new kit including this crowbar.
My only bone to pick is this is a bit pricey, as full blasters with darts/mags with a lot longer reach run similar price points. But, them’s the breaks with this business. $20 could also buy a Sweet Revenge, a Hammer Shot, extra darts, things like that.
Ultimately though I bought it. So yes, if this scratches your role play itch for whatever you like (in my case, busting open crab heads) it is a good buy, I haven’t seen a foam crowbar otherwise.
There may no N-Force, but this works too. Game on, Perpetual Play.

Apologies, everyone.  Sorry about the delay on well… everything!  Let’s get right to it.  I purchased (not samples like usual) the Nerf Hammershot from the Zombie Strike line, and the Nerf Rebelle Sweet Revenge Mission Kit.  Both revolver-styled blasters, but the big question I received was, do they get similar range?

For this review, I tested out both blasters, as they were functionally identical.  Review continues after the break>>>

AESTHETICS (how it looks): 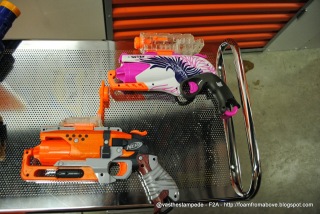 Honestly, I think I preferred the Sweet Revenge.  They both felt like great grips, but if I had to choose, the sleek and smoother feel of the Sweet Revenge made drawing and handling the blaster a bit nicer.  The Zombiestrike faux bandage feels a bit more grabby, if that makes any sense.  To be fair, it’s designed with a young girl’s hands in mind and not an adult male.  Though the Hammershot might have designs for a larger boy.

The orange on the Zombiestrike worked for me, but that lower orange part under the barrel took away from the streamlined look you could see in the blaster itself, almost unnecessary.  The Sweet Revenge went totally along with being sleek, smooth, streamlined, and it made drawing/holstering a breeze for me, after some practice.

Heck, the holster it comes with was surprisingly sturdy and held onto my waist and pockets very nicely.  If you have a more “gymnast” play style though, you should be careful, as the holster isn’t tight enough to hold the blaster when inverted.  Sadly, the Hammershot doesn’t fit the Sweet Revenge holster either.  A Firestrike did, but  I do not recommend that as it stretches the holster out considerably.

I’ve been a fan of the Sweet Revenge and the use of a proper “hammer” mechanism since I first saw the blaster at New York Toy Fair.  In addition to the new mechanism, the fan fire is an interesting (though totally inaccurate) feature, and with the already inaccurate nature of Nerf darts, shooting darts in quick succession like that is more bluster than substance.  Or great cover fire.  One noticeable thing for me is the hammer is definitely easier to manipulate on the Sweet Revenge than the Hammershot, and you can hear it in the video.  But, the Sweet Revenge and Hammershot got comparable ranges and if I didn’t dual I would most likely just use the Sweet Revenge based on how much I prefer its handling.

My darts landed anywhere in the 40′-50′ ranges, and 75′ is likely if I angled my shots.  I did battle test these at MAW 2 with Adult Fans of Nerf and they were a lot of fun to play with, win or lose.  I’m curious to see though how well these fire other types of darts, and will have to revisit that at a future date.  While this isn’t a totally semiautomatic blaster like the Snapfire, I think it can certainly come close to one.  And the trigger is much easier to pull than the Snapfire’s, no matter which blaster you get.  Was the performance and feel worth the money?  Yes.  Many times yes.

Besides the blaster and holster, Sweet Revenge also comes with eye protection.  The glasses are pretty typical of what you can expect, simple frames that don’t fold, but they do the job of protecting one’s eyes.  The pink shading of the lenses might be a little disorienting (I certainly felt that way, when I tried them on in the name of science), so maybe use clear or the orange glasses, which I had no problem with.

Overall, I’m very happy that I not only bought one, but both blasters.  They’re a lot of fun stock, and the new mechanism is hilariously fun to use.  While the accuracy lacks, it just means you would need to get closer 🙂

Questions?  Did I miss something?  Let me know!  I’m a little tired, so I’m sure I missed something.

Collected a number of the videos posted about the Nerf N-Strike Elite press kits and put them all in one playlist.  We all see things a little differently, so maybe there’s something here for everyone!

So far: Rogue1283, BasicNerf, and ClickClickBAMF all have videos up that I’ve found:

Curious about other parts of the Nerf N-Strike Elite line like the new bandolier, Tactical Vest, and even the Nerf Vortex Pyragon will price out:  Shining Foam went and got the whole listing straight off Nerf’s website.  Go have a look!

RANDOM FUN EVENTS MILWAUKEE held a one-day, three-round Humans Vs. Zombies game based off the rule set for Humans Vs Zombies.  It was fan-tastic.  Even better, Razor’s Vapor Blaster folks were nice enough to let us take some giveaways with us!  Yes, we usually have Nerf with us but we needed to test these out under heavy fire conditions.  And man, it was good.  The Vapor line lends itself well at quick reloading, great capacity(50-100 shots per reload), and good ranges out of the box.  Naturally a number of the attendees were from WI or university students, but including myself there was a good showing of people from MANO and TTAGS. 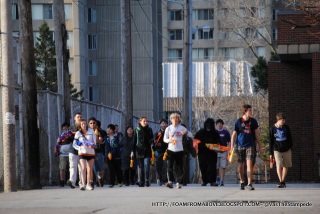 In any event, thanks to Random Fun Events for putting it on and opening up the campus to play like this once more, and to the university population for not batting an eyelash as we rolled around.  Life is full of serious business, a day like this helps break up the routine.  Choose survivors or zombies, so long as you choose Play.

Mind you, these are just photos!  I got lots of video, so expect to see that relatively soon. 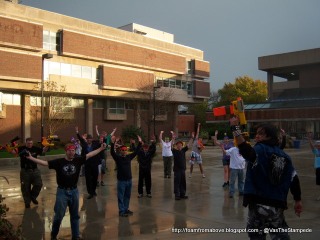 Just a quick shot from the Humans Vs. Zombies game at University of Wisconsin Milwaukee, thanks to Random Fun Events , where folks from the Chicagoland Dart Society and Wisconsin Parkour also made grand appearances as fantastic mods and kickin’ Original Zombies, respectively.  It was the first time I’ve played HvZ proper, and it was definitely a good time meeting everyone, flinging some foam, and seeing some wicked stunts.  I’ll have a more proper writeup soon, once I’m done going through the grand ol’ POV footage 🙂