The above shows a hint of things to come for this year’s Toy Fair, like that new prototype from Zuru. Also on the schedule today I have meetings with:

– Precision RBS (Rubber band shooting launchers from Super Impulse)
– Buzz Bee Toys (With word on new Walking Dead blasters)
– Zuru
– K’Nex (and maybe some new KForce builds) – it’s the 25th anniversary for K’Nex today so who knows what they have in store?
– Dart Zone this afternoon – they typically don’t have functional prototypes yet at Toy Fair (they save the big news for the summer reveal) but maybe they’ll bring something extra this time.
– World Tech Toys  – they make some new blasters to hit the market.
– Factory Entertainment – Soft Weapons and Tactics!
– And a special event for bloggers with Playmates Toys, home of the T-Blasts 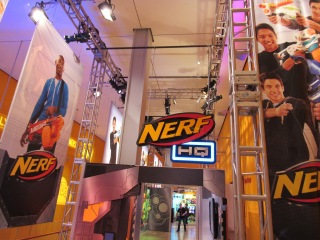 ‘Shoot for the moon. Even if you miss, you’ll land among the stars.’ – Norman Vincent Peale

And there was a lot of shooting (darts, rounds, water pellets, zartz) at this year’s North American International Toy Fair. This makes 5 years now I’ve gone to the show and as always, I come back saying, “wow.” So here’s a quick rundown on what I saw, and some initial impressions.

Quick note: As always, this trip is not sponsored by any of the companies. No one pays to fly me out. This is all out of pocket for me on this trip to ensure I am covering what I want and saying what I need to say.

BRANDS:
There were a LOT of blaster type/associated brands that caught my eye this year. The Story So Far (in no particular order), followed by a taste/preview of things I liked (+) and/or didn’t like (-). As I intend to give each brand their own post, these tidbits are shots from the hip, what I readily recall. 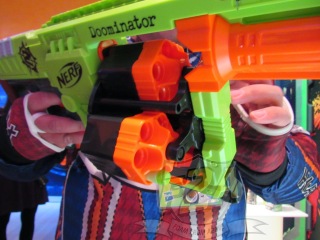 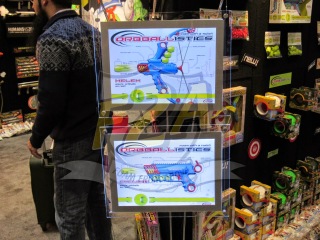 By my count, that’s about 13 different brands that made something blaster/launcher-related.
There’s a LOT of press release info to go through, photos, and videos but I’ll release them all here! Stay tuned, as I will be releasing more galleries and videos this week (piece by piece, so as to not overwhelm you:)  and if you have any questions please leave in the (moderated) comments below!

Collected a number of the videos posted about the Nerf N-Strike Elite press kits and put them all in one playlist.  We all see things a little differently, so maybe there’s something here for everyone!

So far: Rogue1283, BasicNerf, and ClickClickBAMF all have videos up that I’ve found:

Curious about other parts of the Nerf N-Strike Elite line like the new bandolier, Tactical Vest, and even the Nerf Vortex Pyragon will price out:  Shining Foam went and got the whole listing straight off Nerf’s website.  Go have a look!

Alright, Nerf’ put some fine pics on their facebook page regarding the new Nerf “Gear Up” series of repaints. Let’s take a quick look down memory lane to back in February when I got a close look at the blasters. The new series is just a repaint, nothing new or revolutionary has been done on the blasters, they’re just a snazzy new orange and black tigerstripe paintscheme.

So there you go – a brand spanking new Raider, Recon, Barricade and Maverick for the completionist in all of you! Ready to be unleashed around August 1 at major retailers! This line isn’t supposed to be a store-exclusive like the Sonic Series, so keep your eyes peeled!

OH HEY HOW DID THAT SHOT GET HERE.

Well, by the grace of Nerf I had the fortunate opportunity to attend a media event party that you’ve probably seen publicized all over the place by now. (Nerfhaven, gizmodo, nerfhq, the list goes on). I could prattle on about the showcase of 40 years of products Nerf put on display (no crossbows, calm down), I could tell you about the unveiling of the Stampede ECS and it’s rate of fire and decent range (more to come when I actually get my hands on it), the camo ammo, the vest, or the N-Force Battlemaster Mace… but I have…

Enjoy! If you have questions, please comment below or fire off an email at: Foamfromabove@gmail.com