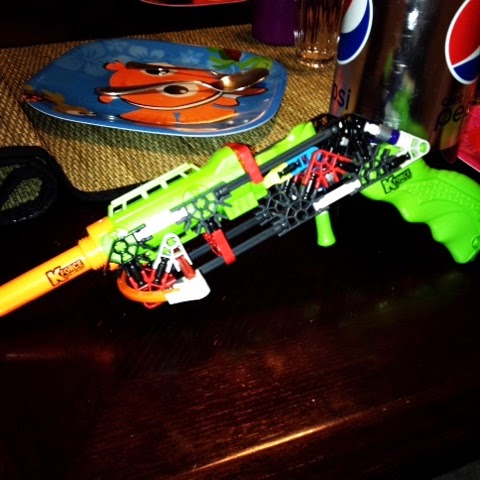 How was your Halloween?  As you hopefully spent it in costume, let’s look at a toy out there for the costuming/role play/imagination bunch, Skylanders Giants Tree Rex Smash Hands from Mega Bloks!

Based on this guy:

Come these hands (sample provided by Mega Bloks) intended to protect the world.

Approx. $24.99 (based on the availability)
Range:  Uhm… what?
Comfy: Totally.  Though obviously built for a kid, these will fit on adult hands too.

You use them as such:

and first things first, they protect your hands! Dress like Tree Rex, minus a lot more external bark on you.

The foam of the hands is thickest and at least a couple of inches thick at the knuckles, so while I don’t recommend using these as boxing gloves or striking people, animals, household plants, or sparring in a mixed martial arts class, they are pretty soft.  There is a small strap on the inside to hold onto while wearing the fists.  The box is open, so when you see these on shelves you can check for yourself just how soft these hands are.

Skylanders Giants and Mega Bloks offer up a way for youngsters to role play as Trigger Happy and now Tree Rex, taking the action from the video game/construction sets to getting up and imagining themselves as their fave characters.  Maybe a play group out there utilizes a melee weapon ruleset, and need something past the Hulk hands of the past.  Either way, I do like the look of these toys and hopefully we’ll see more of Skylanders Giants and their role play toys as the franchise continues.

Like it?  This is also out – Ignitor’s Flame Sword

Let’s take a quick look at where we’ve been.  Nerf Stampede video from the VERY FIRST release party, so many years ago.

Yikes.  Nice to see the quality has (kind of?) improved since then.

The Nerf N-Strike Elite Rapidstrike CS-18 (as seen in the video at the beginning) is a vast improvement over the Nerf N-Strike Stampede from about 3 years ago.  The Stampede had a direct plunger, but it was big, bulky, hit only 30-40′ maybe, and it was a bit back heavy if you were a younger kid (6 D batteries!) and a bit slow on the rate of fire.  Personally, I found that I’d lead a target using half a magazine (9 shots, and the blaster was stock) before getting a hit.

The Rapidstrike doesn’t have that problem.  It hits Elite ranges, is smaller, lighter, and fires faster.  Even though the Rapidstrike uses flywheels, I can pinpoint a bit better with this and waste less ammo.  Streamlines being streamlines, I don’t expect super accuracy out of them (even Elite ones) so that’s not a concern for me.  But the groupings seem pretty decent all the same, even with full auto.  I found the trigger pull responsive, and no lag like there was waiting for the Stampede to prime and fire.  It’s a fraction maybe faster, but Nerf tag is a game of inches and seconds in Rate of Fire.  Every little bit helps.  Swapping out mags was smooth, and I recommend 18 round straight mags.

That being said about magazines, here’s the thing – I ran into some issues with reliability.  It got some actual gameplay (hi Des Plaines!  More on that in  another blog post) I used primarily 18 round straight magazines (like the clear one it came with and 3 others.  2 worked (includes the clear) and the others did not.  Further testing is required to see how far the rabbit hole goes about this, so expect a response video to my initial firing test.  I’ll also update this blog post.  Need to test drums, and different generations of the 6 round mags too.

Also, adjusting my grip, I hit the mag release once unintentionally.  When things are moving fast, that might be an issue for some people and they will lose the magazine.  Typically the magwell has been strong enough to not drop the mag on me, but it did once so far.  Depending on your mag, it might drop.  Depending on your mag, it might jam.  In this instance, the location of the release is cool, but the classic orientation on the sides might have made more sense.

Does that justify a $39.99 purchase?  Considering the fun I’ve had using this (when it works) and that stores have a return policy, maybe.  It really is a ton of fun as a blaster and having something full auto is a welcome function I’ve missed with the Elite line so far.  Slam Fire just isn’t quite the same.  Hopefully my videos are a bit helpful in making a decision, but ultimately it rests on you as a player to see if this is your style.

Aesthetically, this blaster made me think of the carbine from “Aliens” and the adjustable stock made it either comfortable or usable for closer quarters.  Also… the accelerator trigger means dual wieldings 🙂  And that makes all sorts of things awesome:)  Happy hunting!

Questions?  Comments?  Did I miss something?  Need more info?  Shoot me a message!

Monkey Business Sports was awesome enough to send over some of their Foam Strike line, in this case Pocket Shots, their take on the slingshot.

In order to load it, you wedge a ball between the uprights of the Pocket Shot, pull back the “hammer” and release, striking the ball forward.

As you can see, it took some adjusting to get the shot to go straight but it flew well once I had the mechanics dialed in.  The table was set up around 30′ away, and the ball dropped a little short so there’s your range there.

The Pocket Shot strikes me as a blaster that truly can get played indoors or out.  The ammo flies softly enough that I don’t think it could knock over a vase or anything breakable.  It is also small enough to pocket, even if you are carrying additional ammo which is a good characteristic for a sidearm.  The only shortcoming is that unless you are carrying additional ammo, you’re stuck with 3 shots before you have to retrieve.

The action of pulling back the bungee cord (as all Foam Strike shooters use; compared to the rubber tubing Zing Toys uses) is a very satisfying and tactile sensation, so while this won’t set any range records it is still a bit of fun to play with.  Definitely leave a group of them on a table at a party and see what happens:)

The shape makes these shooters very low profile and unassuming, as opposed to some typical gun shapes that might scare administrators or parents.  Coupled with the softness of the ammo and the low velocity rate, if my nephew were still 5 years old, I’d feel safe letting him play with this under supervision (he’s 10 now).  The Pocket Shot is pretty quick to load and a convenient sidearm if you’re in the market for one.  At the very least, having a slew of them around and random shootouts with friends is a great way to even trigger interest in the hobby at large.  Pretty good offering from Foam Strike with this mini shooter, and after seeing their own bow and arrow hit 200’+, I look forward to seeing more from Monkey Business Sports, for sure.

Hey all! Found this pool noodle with fins and the center cut out for $2 in the Tiys R Us seasonal section. Huge foam missile. Anyone have a titan handy? I can neither confirm nor deny results, but worth a look, even moreso when they go on clearance 🙂

Here’s the new info I received in my inbox: You’ll see it pop up elsewhere over the next few days I’m sure!

So there you have it. More info as it comes out!

One of my faves, the Spy Gear Signal Launcher! It’s a fun blaster stock, but between the massive tank on the inside and the compact size, I like using it plenty. Not sure what the ranges are, but it’s enough for me. 🙂 Music’s not mine, but property of applicable parties.

Fellow blogger from Singapore, SGNERF has gotten a video up of the Tetra strike! Yeah, I’m pretty jealous too 🙂

Hello all! So, anyone worth their salt and a visitor here has hopefully been to an outing/event/scrimmage whatever of some sort involving nerf blasters. In my experience, the field has been dominated by the boys, but what about the ladies? I’ve met a few girls at nerf outs and have run across a few female nerf enthusiasts on the internet, so let’s get some consolidation going! I’m a guy, but all about equal opportunity.

So. Here’s the propostion:

Ladies, who wants to be a “Foamme Fatale”?

I’m serious! Send a pic of yourself (guys, have any lady friends into foam blasters?) and a foam flinger (Nerf blaster, Buzz Bee, Lanard, whatever) to FoammeFatale@gmail.com along with a few words about yourself, a nickname, fave blaster, game type, and a colorful blaster related anecdote.

As far as pics go, here’re the ground rules:

1) NO SCANTILY CLAD PHOTOS. I’m serious. The more skin you show in a photo does NOT (doesnotdoesnot) increase your chances of being picked as a FoammeFatale. And seriously, I’m not about to risk someone underage trying to send me pic of them in a two-piece, thanks. Trying to pander to my more base sensibilities is insulting.

4) Make sure to blur out anyone else in the photo not you. Just in case they don’t want to be featured too.

So there ya go. I’ll pick one photo a month for now, so if you submit a photo and it doesn’t get picked then that doesn’t necessarily mean I won’t go back to it later.

Voluntarily sending me a photo is permission for me to use your image on my blog where the only compensation you receive is recognition on FoamFromAbove as a “FoammeFatale”. I won’t photoshop anything crazy, and I will let you know if anything else will be done with your photo with your permission.

Questions? Let me know! Looking forward to your submissions!

And just to get the party started: