Assembly/Firing video of the Adventure Zone (Dart Zone) Enforcer Blaster – it gets 140′ (angled)?

Thanks to Dart Zone for the sample! As always, my opinion remains my own.

I want to get some game time with this blaster before coming up with a proper review, but right off the bat the Adventure Zone Enforcer belt-fed blaster from Dart Zone got AT LEAST 140′ right out of the box. That’s pretty impressive for a freshly opened blaster. That being said, reloading this beast would be a moderate pain since I don’t think there are plans to sell the ammo belts separately. And to head off another question, yes, this blaster is branded “Adventure Zone” but that’s to identify the Wal-Mart specific brand of action toys associated with this and other blasters undoubtedly coming out as Wal-Mart exclusives. It’s a Dart Zone blaster, same as the LegendFire and Magnum. It unloads its ammo payload pretty quickly, and should give any rushing team a reason to pause but the groupings are pretty wide the farther out you shoot. For $29.99 though you are getting good power, good ammo capacity, and a really satisfying shooting experience feeling the chains move and hearing the blaster chug through darts. Kids are gonna love the gatling feel of this blaster, and older users are going to like the power. And for $29.99, the price is just right compared to other blasters out there that shoot either less ammo or slightly shorter max ranges. I don’t say this often, but if you have to spend on any blaster, definitely give this a look. I’ll update this review with some gameplay thoughts once I actually field test it, but until then, color me impressed for now.

Nerf reveals Spring 2016 blasters in RARE Visit from “Nerf Fan Ambassadors”
Vas The Stampede
Fresh off the “Nerf Fan Ambassador” visit to #NerfHQ in Rhode Island, enjoy the info on these future releases. More on the actual visit in am upcoming post, so stay tuned. 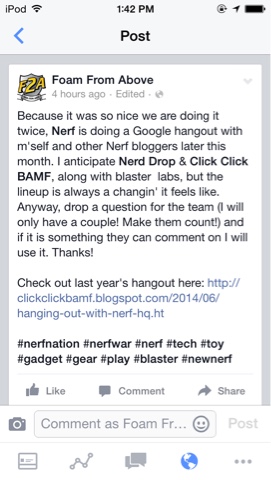