Buzz Bee Brings the Blasters for 2017, Fall 2017*
Vas The Stampede
*- in stores by July possible according to the press release. Availability subject to location.

Buzz Bee definitely brought a lot of promise to Toy Fair 2017. They introduced three dart types (precision, long distance, and suction), increased the power of their blasters (openly claiming 100′ ranges on some blasters) and BROUGHT SOME NEW FEATURES.

Exhibit B: The Thermal Hunter –

And the sensor – (From RandomShadow09)

At Toy Fair, an adapter for the Thermal Sensor to fit onto Nerf blasters was in development as well, to be packed in the Thermal Hunter.

I was not able to get a price at this time, but I am following up and will update this post once I get some more information.
Additionally, some new tweaks on old patterns:
The Blizzard – 40 shots and slam-fire only, like the Buzz Bee Sidewinder –

No price on this one yet either, I may have missed it.

And the Tactical Storm (pictured above with the Rail Blaster):

In closing, Buzz Bee continues to keep their low prices for the most part while upping their features. Some folks seem particularly excited about the Rail Blaster, others want to get their hands on the Thermal Hunter, and some just want a less pricey alternative to Nerf blasters. Given the products from last year, and the licensing for The Walking Dead, Buzz Bee continues to impress me with what they’re putting out in build quality and themes. As a good number of the blasters were prototypes I can’t say much about the build or the performance of these blasters, I’ll reserve that for the final retail models I will hopefully get later on. BUT…. some of the ideas that Buzz Bee had at Toy Fair were impressive indeed. Keep an eye on this blog and YouTube… as soon as I know, you’ll know 🙂
And some additional photos! Full Gallery of the Buzz Bee booth is here: 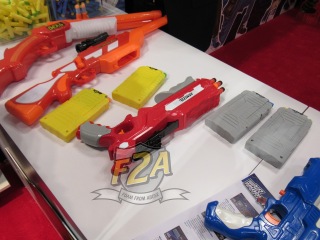 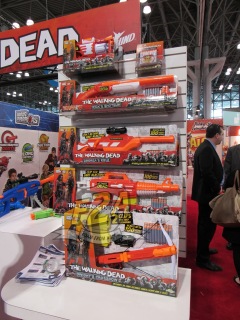