As is the custom here at FFA, when I go to a foam dart fight chances are I’m going to be bringing along cameras. These, are some of the highlights from Back to Basics:

FoamFromAbove – Going Back to Basics! from Video Ninjas on Vimeo.

Enjoy! There’s a lot of stock ammo, a lot of happy faces, and more!

For anyone that wanted’em, say hi to the pics from Back to Basics in Oak Lawn!

A more detailed write-up to follow; but enjoy the pics for now! If you were there, hope you had fun!

And thanks to Nerf for sending some stuff our way to hand out! It was much appreciated! 🙂

It’s about that time –

Once more unto the breach, dear friends! In the Midwest, a good number of folks that Nerf in IL shelved their blasters since Nov/Dec 2009, due to school, weather, weather, and no indoor venue to play. Well, it’s warmer now and a new round of Nerf/foam blaster battles have begun! Minnesota and Wisconsin had their events last weekend, and some of the folks in Chicago just theirs underway as well.

This event didn’t carry the same kind of weight that the usual wars carry. This was conceived in all of two-three weeks, when a fight usually has a date set months in advance to give attendees enough notice. Some of us were getting a little restless but were not able to make the trip up to the MN event that weekend. Snake, one of the Chicago Area Nerfers here took it upon himself to host a small local “warmup” to get off his butt and hopefully indoctrinate some new faces to our little slice of hobby heaven.

He took a different path from some of the past events. He actively banned a lot of specific types of mods and blasters (some homemades, for instance) and even ammo. The basic rules:

“If you don’t like it, don’t show.”
“Run your war how you want to run it.”
“The host has a responsibility to make sure his attendees have a good time.”

The focus was to get back to running around in super close quarters with epic dodging and some sword/shield/axe blocking. Not being paced off at huge distances behind sparse cover with tons of No-Man’s Land. There’s been talk of a power creep in the midwest but that’s a topic for another day. Snake wanted to explore what going back to our roots with short ranges and stock ammo would be like after the previous few fights where this wasn’t the case.

Either way, there was a decent show of people. About 12 people from the surrounding Chicagoland area showed up, some with a few fights already under their belt and a few who haven’t been in a good fight yet. It was a good mix!

I personally had a good time. We were all laughing at numerous points during the day just out of the craziness of the action. The close ranges led to a lot of running and even though Oak Lawn has its own issues with cover the fact we could run and dodge pretty much compensated for that. The blasters of the day varied; the N-Strike line (Raider, Longshot, Longstrike, Recon, Nitefinder, Magstrike, etc.) all saw use in addition to one or two homemades, furyfires, and other off-brand blasters. The N-Force melee weapons also saw some action, coupled with shields. We didn’t use “larger ammo takes out shield” rules, mainly because we forgot, hah.

We were in and out of rounds really quick, too. Last Team Standing, Last One Standing, Capture the Flag (lots of capture the flag), Protect the VIP, and Center Flag Push were all orders on the day along with switching teams every few rounds. It was quick, fast-paced, and only really slowed at lunch or when we needed water. But we were all running, so much for each game. Heck, at one point we even got to use the park/jungle gym, which adds a nice dimension to CtF. If anything, we needed more gametypes to throw in.

It was a good first war for a lot of people, and they say they’ll be back for the next one. As far as being a good introduction for people into this hobby, I’ll say, “Achievement Unlocked.”

See you on the field!

Snake hosted a war this past weekend! A full writeup will follow (and hopefully a video) but in the meantime, here’s the gallery!

Chicago Beatdown 4 was a couple of weeks ago. It was our last event outside before we move indoors for the winter for our games. This, is our CTF round or two. HAHAHAHA!

(Music used is from “300” and Queen’s “Don’t Stop Me Now”. All are owned and copyrighted by respective owners, so please don’t sue or cease/desist)

Pics from the final outdoor Nerf scrimmage of the Fall! Next we meet = INDOORS.

Thanks to users Merzlin and Demon Lord for the shots!

Video from the DTC (Defend the Core) round at Chicago Beatdown in Oak Lawn, IL! 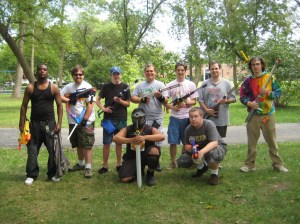 I think I forgot to grab a nerf BLASTER.

Clearly, it had been long enough. A few weeks later, we were back in Oak Lawn. Third in the series of Snake hosted events and it was game time. Once more we reported out to Centennial Park for a day of foam, fun, and most importantly, the Fight.

It was a turnout of maybe 9-10 rotating people we had ourselves set for the day. Games included Team Deathmatch, wingman, CTF, Defend the Core, and Team Powerball. Come to think of it, spanning that out from 10-4 or 5 really explains why I pass out for 11 hours afterward. But more on that later.

What this day saw was the birth of a +bow vs. all round, the strength of the marauder, and awesome of dart blocks. Minimal injuries, give or take a nutshot or two, but no one bled and no one had to be carted off to an ER… this time. Some random people even joined in from watching us, and they knew what was up. Stefans, Captain Slug, they knew the talk. Walking was a whole ‘nother matter, but we all start somewhere.

Learning my lesson from the freak accident at the last game, I had to pack a paintball mask. It protected the temple and considering I got hit in the face at one point during the day, it was worth it. It really is a bit extreme, but for my own peace of mind I’m ok with that. As for the rest of my equipment I was packing a magstrike, my bbb, a crossfire buckler, and the “Wicked MC” (see previous blog) to rotate in and out over the course of the day. The bbb was inconsequential though, because truth be told I had more fun running around with a high ROF blaster and melee weapon all day. Reports say I took out an entire team. Dare I say it, the first round where I ran straight at the other team and jumped in the middle of them swinging, tagging at least two of them before getting hit totally made the day for me….

…UNTIL I started getting dart blocks here and there. The wider surface area of the marauder definitely helps if you can guess near where the dart’s going to fly, and on at least a couple of occasions I managed to block a wayward shot, to follow up with a charge. If not the Wicked MC, my buckler picked up the slack. It was almost as if there was nothing the marauder couldn’t do. During Team Powerball someone tried to drop a point into the bucket and I swatted it out. If they tried to outrun me, the marauder had enough length to compensate and I still got a hit. It was a good day for the N-Force.

While defend the core with my “Decoy” play style was a lot of fun, Team Powerball was pretty much how we closed out the day. An epic struggle of sorts between two +bow’d and sprightly teams. Running and dodging, getting out of the way of melee weapons, being thankful the other team didn’t know the “Flying V”, and getting a “300” style sword hit was a nice capper.

For future reference, 15 mins. may be a bit too long for DTC rounds. Depending on the # of people maybe, but for our size events 5 minutes may be just as good.

Just some quick etiquette notes to anyone who sees us on location:

1) DO NOT start grabbing at stuff if you don’t know whose it is. That’s just being a douche. And you may be unlucky and not know where it’s been. I’m talking to you, random passersby!

2) DO NOT shoot at other people between rounds. Be nice.

3) Might wanna recheck your strategy if you’re yelling “FALL BACK!” all day long.

4) Why, oh why do you charge at me with swords when I have a pistol? Sometimes I feel like I’m the only one that ever watched “Raiders of the Lost Ark.”

That’s it for now!