YEAR IN REVIEW: BLASTERS AND MOAR BLASTERS
Vas The Stampede

Blogger note: Each section will not encompass ALL releases for each brand. I am choosing highlights for each.

NERF CONTINUES TO INNOVATE FOR 2017, BUT ALSO BLASTS YOUR WALLET.

2017. Probably one of the craziest years for blasters thus far. Nerf continues to hit some really high notes with their Rival line, continued world-building with Alien Menace, Doomlands, and hitting stride with continued products for Zombie Strike. However, they also continue to push the envelope when it comes to prices. While they are establishing themselves as the de facto blaster brand (so much that the brand has become eponymous with blaster battle play and games) they also establish with Nerf you get a premium product but also at a premium price.

The Nemesis, Regulator, Judge, Twinshock and even Dreadbolt were all 2017 releases and while impressive big blasters, the lowest of the bunch was $39.99 approximately. The Voidcaster, a semiauto spring pistol also released at around the $19.99 mark. The Raptorstrike looked great but it was another bolt-action rifle and while impressive aesthetically wasn’t functionality we hadn’t seen in previous blasters (bolt-action, magfed, accustrike ammo, etc.) The new blasters for the most part were cool in their own right –

The jewel of the Nerf releases I think was clearly the continued monster offering from Nerf Rival. Higher fps, higher capacity, even at the prices it’s what the community was doing and Nerf made an offer for folks to step up their experience right out of the box. The Nemesis is costly, but that just makes blasters like the Hera, Kronos, even Khaos (with mags now sold separately) a bit more accessible and reasonable by comparison. And the Hera and Kronos were sleeper releases that weren’t a Toy Fair but were a huge hit when they came out, adding functionality to the Rival line of a semiauto flywheel Rival blaster and a 5 shot pistol with an internal magazine.
Not to even begin on the licensing for Deadpool, and Star Wars blasters that are perform pretty well (though I’ll say I wasn’t excited to see the Boba Fett Apollo kit), Nerf continues to keep the market stocked with a good amount of product for shelves. It’ll be interesting to see where Nerf goes next (and a leaked video earlier this year hinted at Bigger than a Nemesis, maybe even a Rival rifle…. a Rivle?) and with all the sub brands they have you can only expet more Nerf on the shelves for the coming year (some of which has already leaked onto shelves early, including the Mediator and Tri-Break.) If I had to nitpick anywhere, I wish there was more range out of the Judge, and maybe something new besides another rifle for Accustrike. Impressive as the lineup was in places, there is still some room for improvement and maybe some concepts I would like to see revisited. The Signature Bow was another great item, albeit not your usual blaster fare.
Toss in the additional licensed products from Sakar and Jazwares, there will be a full array of toys, accessories, and items to choose from to add on this year. Nerf continues to pave the way for other brands. And yes, there were also a bunch of smaller releases, repaints, exclusives, but these are the highlights that stuck out most for me. Dare I say it Nerf continues to set a gold standard for blasters in mass market, and whatever innovations they make definitely find their market amongst hardcore fans and casual players alike.
Don’t sleep on the competition – “Nerf or Nothin'” =/=…. Buzz Bee, Dart Zone, Zuru….
Competition is healthy! It’s so good. And when the competition is like this, the real winners are the players.

Buzz Bee came out swinging, releasing the Thermal Hunter, Zenith, Barbarian, Tactical Storm, Dwight’s Crossbow (for “The Walking Dead”)…. all for lower prices than Nerf blasters. The highlights were not only the number of pump-action blasters they made, but some accessory innovation with the Thermal Sensor (shown below!)

The Thermal Hunter was by and large the most comfortable blaster from this line for me, and the pump-action gave it the advantage over the Tactical Storm. I also have the Monorail (thanks for the sample, Buzz Bee!) but man…. the issues about it loading are pretty apparent. It does jam on me quite a bit from just the initial testings I’ve done, and considering how excited I was at Toy Fair I was a bit frustrated with the final product. Great idea, great look, but I wish the experience with the Monorail so far hadn’t left me wanting.

All the same, heck of a year for Buzz Bee releases. They really stepped up to provide an alternative dart flinger for Nerf, and at the prices they have the offerings are pretty good! If you’re a blaster player on a budget, don’t sleep on Buzz Bee toys. You definitely get what you pay for and a lot extra, I think. They still haven’t made their comparable Nerf Rival blaster, but that brings me to… 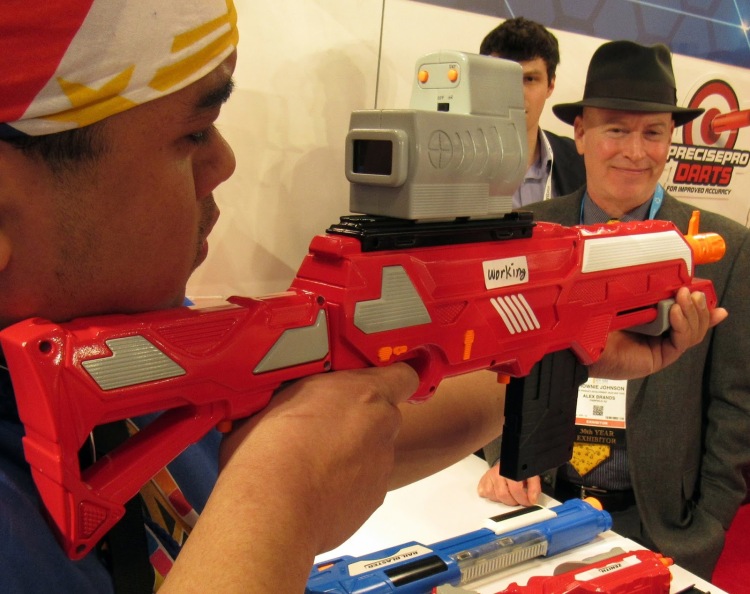