And there it is.  The Nerf N-Strike Elite Mega Centurion.  One of the three main new blasters for the year (Revonix and the Rapidstrike being the others so far, besides Rebelle, etc.)

EDIT:  The Nerf N-Strike Centurion is currently up for preorder on Amazon (as reported at Basic Nerf and AFON)!
Buy it now at Entertainment Earth! 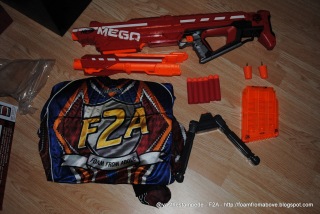 Now let’s get to it.  When news of a Mega line, much less a “sniper” style rifle that was going to outdo the Longshot and Longstrike came out, I was excited.  There’s always been 1 or 2 players I knew who liked to sit in the back row and provide support for assault/run and gunners.  The Centurion was their stock blaster solution I thought.

After some initial firing…. I think I built it up too much in my head.  First, let’s tackle some of the questions I have about the blaster.

The Size.  At over 3′ long, this blaster is HUGE.  And unlike the Longshot or Longstrike, you can’t remove the front barrel once it’s on.  (You probably could, but not without risking damage to the blaster.  I warned you!)  It makes maneuvering through a jungle gym or tight indoor spaces a bit tougher unless you have it shouldered with a bandolier.  And even then, you’re running without your blaster drawn which could be crucial seconds.  With practice, this might not be a concern but again, that’s with practice.  On the plus side, it’s friendly to lefties and righties.

The rate of fire.  The Centurion has a draw pull that comes out to approx. 13″on a bolt-action motion.  On the run, that could be an issue for a fleet footed player looking to fire back.  Pump-action is much faster in comparison, and electric blasters have the advantage.  Again, this blaster is designed to be used as a sniper’s play style, so it would take some adjusting to remember this and act accordingly.  Methodical, and NOT a spray and pray game. 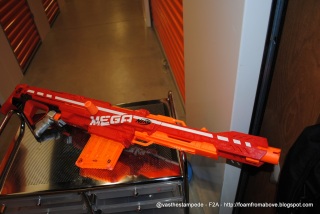 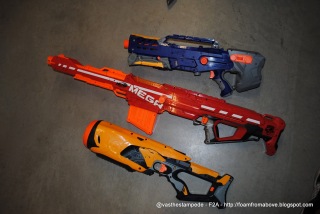 The accuracy.  Granted, these are Nerf blasters and inherently aren’t known for pinpoint success at 100′.  Even Elite streamlines still veer off course, so nothing’s perfect.  However, there is a level of tolerance that I have come to expect from Nerf blasters and Elite darts, and the Elite Megas definitely left me wanting.  I was expecting them to be styled more like Elite darts, with heavier heads and at least able to hit within range of a target.  In fact, the foam seems thinner and the heads were just as squishy as the original orange streamlines.  So Elite Megas, these were not.  Additionally, it was getting range relative to the other Elite blasters… and I was expecting even a few feet more.  Different functionalities add so much to a play pattern experience!

And as for the bipod?  It does wobble a bit, and does seem like it wants to let go frequently.  Believe it or not though, that bipod is far more stable than the ones on the Xploderz Xranger or Shadow Hawk.  I was pleased with how it felt, and had to try it on all sorts of things –

But!  All that being said, I see potential here.  Larger ammo I also find inherently funny, so the Centurion is a fun, over the top kinda blaster to use on unsuspecting victims.  Much like the Vulcan and the Hailfire, this blaster is designed with a role play mindset factored in; a kid who wants to pretend to be the sneaky sharpshooter, unlike the other blasters where they play a lone wolf hero archetype.  Unfortunately, the form does not lend itself well to the function of the typical way a person might play Nerf.  At least, not right now.  I intend to try the Centurion out in the field more when more mags and ammo are available, as right now with only one mag reloading is an issue as well.

And yes, there are pics out there showing the internals.  Say what you want, but I find the “KA-thu-CHUNK” of each shot oddly satisfying.

So, where does that leave me?  I’m excited to see mega darts return, but I’m just not overcome with awe for the Centurion.  The performance was not quite what I expected this but this is only the first blaster in the Mega line and I look forward to what else comes next.  Especially if it means something like the largest Vulcan EVER:

Does that mean it’s worth the $50?  To be on the forefront of trying out a new innovation from Nerf, sure.  To shoot your friends with oversized ammo, sure.  To have a cool looking totally over the top blaster that still gets pretty good ranges, then sure!  Just remember, this isn’t a blaster to run, strafe, and spray and pray with on the front lines.  It’s more suited to a methodical, sneaky style outdoors or from higher vantage points to check the opposition.

Questions?  Comments?  Feel free, and see you on the field.