New York Toy Fair ended and that leaves a hole in my schedule and a LOT of material to run through.  But as always, I’ll do my best.

Nerf-wise, the biggest news to come out of the showroom this year wasn’t some super secret video with a mysterious silhouette.  This year Nerf was upfront about where they’re going by revealing their new line with girls in mind, the Nerf Rebelle. 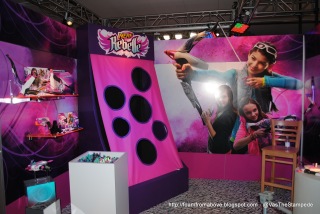 For years, I’ve been running the “Foamme Fatale” gallery on my blog to show that in fact, girls are interested in and play with Nerf toys too.  This isn’t, nor should it be a new or surprising development.  From Amazons to Samus Aran, females are into the action toys as well.  It’s good to see that for a couple of years, Nerf did the research and is now getting this initiative in gear.  1200 girls surveyed to see what it is they wanted out of Nerf blasters, and the Nerf Rebelle line is evidence of that.

Now, I don’t remember, but did anyone see girls in the running for the last user-submitted NDTL?  Just putting that out there.

First off, I’m a big fan of the line.  I love the functionality, the streamlined feel of the blasters, and the call back to older weaponry (Nerf Crossbow, Bow N Arrow) with some of them.  The “Rebelle” (and I think even that’s a bit smart, I believe playing off “reveille”) line will get the same performance as the Elite blasters, and the only difference then is the outside aesthetics, kinda like how boys and girls are different on the outside, but on the inside we’re all able to reach 75′. (Or something like that).

The performance is there for the Rebelles, for sure.  And handling the blasters I can tell you the function matches the form.  They are sleek, streamlined, feel pretty mobile, and are very eye-catching.  All good ingredients for success.  Now, at first I was wondering about the pink trim, and “why does the girls stuff have to be pink?” but… it’s what my niece has been looking for.  And this is why I say it will sort of challenge gender stereotypes.  Sure, pink is a stereotypically feminine color, but remember the original Bow And Arrow(s?)  And as cool as some of these blasters are (I refer to the Nerf Alpha Girl) the boys are going to HAVE to get used to a pink blaster.

So, failed argument bemoaning the coloring.  Nerf researched high and low for 2 years figuring out what girls wanted, and they wanted pink blasters, accessories, social interaction, the works.

One more note on the pink… the packaging and everything is going to stand out on the shelves.  Think about it.  You walk down the toy blaster aisle, as a young girl you see aisles and aisles of shooting toys in a sea of blues, greens, yellows, oranges, and all with serious-faced boys firing blasters…. and there it is: 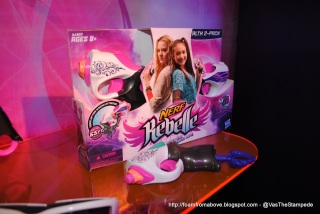 Something different.  A pink box, a couple of girls looking like they’re ready to have some fun with blasters.  And not just blasters where it’s “oh, these are for boys, but hey girls can play too” it’s FOR you, a female, speaking TO you in the advertising.  Images mean everything, and this might be what it will take to get most (remember, research of over 1200 girls for 2 years) girls to give the blaster aisle a 2nd look for something directed at them.

Marketing theories aside, the Nerf Rebelle line is only one hint of a trend to bridge a gap between boys and girls in the active toy department.  Not just Nerf, but Zing Toys made a pink bow called the Huntress: 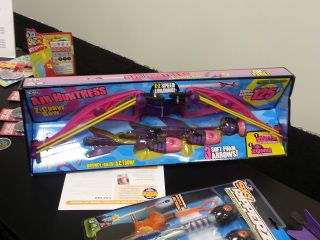 As well as included some female characters into their marketing collateral.

What does this mean?  Attempts to appeal to the association to characters such as “Katniss Everdeen” from The Hunger Games and “Merida” from Disney’s Brave.  No joke, a number of the pitches I heard during Toy Fair drew correlations to creating strong female empowerment imagery to associate to one’s toys.  Or it was applying technology for existing “Boys'” toys to “Girls'” toys.

What does this mean for our blasters?  Nothing alarming, don’t get me wrong.  What this means is that girls have been recognized as a missed opportunity in the action toy department, and Nerf’s Rebelle and Zing’s Huntress are the start.  We might see more of this female-oriented development from other companies in the future should these particular initiatives succeed.

The OTHER point, is with the social climate being what it is right now in regards to firearms, bows and arrows and weaponry of that category are the 2nd trend I’m wondering about.  That’s why you see a Blazin’ Bow after a series of triggered blasters from Nerf, the Rebelle line is bows and crossbows (for the most part), and why Zing is what I believe is the dark horse of the category with their bow-centric toys.  Sure Rebelle has the revolver, but unlike the Nerf Elite series, between the aesthetics and the color scheme, Rebelle seems like it is trying really hard to shake the image of a modern firearm, with all the smooth aesthetics and bow-type functions in spite of the triggered system (that’s why the Heartbreaker is the big item from the Nerf Rebelle line; it’s a non-triggered toy I think and thus less of a firearm.  And Katniss.)

My Last Dart has already spread the news that Nerf is going to make discs that serve different functions, one of which is to get the discs to fly faster and farther.  Knowing that they are already pushing the envelope with the blasters themselves, this makes sense that they decided a back door way to try and get higher performance with the ammo.  The Elite darts were only the start (essentially modified stock streamlines). Now you have what could be a precedent for different dart types as well.

Other companies do this now.  Zing has two versions of arrows; the long-range version and a suction cup version.  Each gives a player a choice on how they want to play, so I would not be surprised to see more of this, with different types of ammo that might fall within safety regs but are different from foam darts.  See: the TekRecon, Vapor blasters, and Xploderz ammo.  Heck, Marshmallowville is out there with Marshmallow shooters too.  Rubber bands, water pellets, marshmallows… smaller ammo than darts, flying farther, and higher ammo capacity than Nerf. (TekRecon’s Havok is going to boast 90 shots per reload, and similar with Vapor and Xploderz.)

Head spinning yet?  Girls are a new market, look for new innovations in ammo types more than the blasters, Max Force and the first round of water pellet blasters was the start.  Possibly blasters are going to start looking crazier and crazier, so they look less like real firearms.  Ultimately though, Nerf still has one more (or 3) trick up its sleeve…. the as-yet unrevealed blasters that are under NDA right now, but being hinted at.  Nerf’s still THE brand to contend with, and we’ll just have to see what happens next.  Lock and load.