Select your curve to fire rounds left, right, straight, or down and take the competition by surprise with the NERF RIVAL CURVE SHOT FLEX XXI-100 blaster. Fire around corners, barriers, and obstacles with this blaster that unleashes rounds in a curved trajectory, giving you the ultimate strategic competitive advantage! Turn the rotating muzzle to choose whether you want the round to go straight, left, right, or down. Your opponents may be out of your line of sight, but with this NERF RIVAL CURVE SHOT blaster, they can still be within range, so take aim and curve your shot! Includes 5 Official NERF RIVAL rounds and has integrated onboard round storage. Pull down the priming handle to open the breech, load 1 round, and close the breech. Then select your curve, and press the trigger fire. Includes trigger lock. Eyewear recommended (not included). No batteries required. Available at most major toy retailers nationwide.

Select your curve to fire rounds left, right, straight, or down and take the competition by surprise with the NERF RIVAL CURVE SHOT SWIDESWIPE XXI-1200 blaster. Fire around corners, barriers, and obstacles with this blaster that unleashes rounds in a curved trajectory, giving you the ultimate strategic competitive advantage! Turn the rotating muzzle to choose whether you want the round to go straight, left, right, or down. Your opponents may be out of your line of sight, but with this NERF RIVAL CURVE SHOT blaster, they can still be within range, so take aim and curve your shot! Includes a 12-round side-loading internal magazine and 12 Official NERF RIVAL rounds. The bolt attaches to either side for right-handed and left-handed battlers. Load the magazine, move the priming bolt, and press the trigger to fire 1 round. Includes trigger lock. Eyewear recommended (not included). No batteries required. Available at most major toy retailers nationwide.

Select your curve to fire rounds left, right, straight, or down and take the competition by surprise with the NERF RIVAL CURVE SHOT HELIX XXI-2000 blaster. Fire around corners, barriers, and obstacles with this blaster that unleashes rounds in a curved trajectory, giving you the ultimate strategic competitive advantage! Turn the rotating muzzle to choose whether you want the round to go straight, left, right, or down. Your opponents may be out of your line of sight, but with this NERF RIVAL CURVE SHOT blaster, they can still be within range, so take aim and curve your shot! The high-capacity HELIX XXI-2000 blaster features an easy-load hopper for quick reloading. Pump the handle to prime and press the trigger to unleash 1 round at a velocity of 90 feet per second. Includes 20 Official NERF RIVAL high-impact rounds and trigger lock. Eyewear recommended (not included). Available exclusively at Target.

Keep an eye on this entry! Bookmark it! Or better yet, follow me at tiktok.com/@foamfromabove for video as soon as the samples arrive!

Video firing the Nerf Accustrike Raptorstrike is done! Enjoy this while I work on the rest. Updating this post as I finish each one, and a writeup to follow. Thanks!

Update: Let’s do this.

No big surprises at the Nerf showroom today, but I finally got my hands on a number of the products revealed over the last few weeks.

First off, thanks again to Nerf for giving me the 9 AM slot, I always appreciate the timing. Second, thanks to Michael Ritchie (VP, Global Brand Strategy & Marketing) for stopping to take a few minutes to chat with me. I hadn’t known I would run into him, otherwise I would have taken a few questions from you all!

Michael and I discussed the Nerf brand as it was and where things were going, and touched base about the specificity in certain lines. ICYMI, the Elite line is still seen as the “performance” level blasters and thus are denoted with the ranges and frequencies blasters hit that range. Nerf is still very much a storyteller brand as well to foster the “unstructured play” of its market (kids) so they can create their own stories within the blasters they use. Hence, forming organized games and leagues aren’t something Nerf is really invested in, but they recognize these exist. If you remember the Nerf Dart Tag League, Nerf put on these tournaments once upon a time but stopped in order to allow the fans to create their own. Think of Nerf as a sandbox, and games, leagues, teams, clubs, etc., are all castles that get built within it. We spoke about the involvement of the community in creating content (that’s YOU folks), from people who have maybe under a 100 views on their videos (me) to all the other channels with way bigger followings. Also, be ready for Hascon! It’s coming.

ACCUSTRIKE. Currently, the Alphahawk and FalconFire are available, but coming in hot is the Raptorstrike, shown above. It has 1 tactical rail that the bipod is mounted on, a flip-up sight, extendable legs in the bipod, a 6 shot magazine, additional magazine storage in the stock, and a solid bolt priming handle. Unlike the Alphahawk, the Raptorstrike’s bolt handle looks like the metal pin version of old. I hope to still see that on the final release. The blaster itself is LONG… so long that there’s a good distance between the magazine and the trigger. But in that space there’s an additional spot on the body to use as a carrying handle. Another neat feature is the placement of the mag release, it’s right on the inside of the trigger guard across from the trigger but accessible to both left and right-handed users. Kudos to that, Nerf.

The Mega Twinshock is ANOTHER big blaster. 10 shots, single fire (with a staged trigger, pull it slow enough and it will shoot one dart at a time), two shots at once, or slam-fire, you have choices! There isn’t much else to say, and I really enjoyed using it. Vicious simplicity.

The Regulator. Burst fire. Full Auto. Single Fire. Flywheels. An oddly included carrying handle. “Ammo Out” warning light. The Nerf Modulus Regulator has so many features integrated into it, there might be a kitchen sink Modulus accessory in the works at this point. I didn’t experience any skip or interruption holding the accelerator trigger down while switching firing modes and it seemed like a seamless transition for the blaster. It runs on 6 “C” batteries, which leads me to believe it fires as fast as a Hyperfire and its sounds that way from when I tested this blaster. Again, this is a prototype and as such I can’t get too excited until the final product is in hands. Was I impressed? Yes. Cautious optimism? Always.

Ok, THIS blaster caught me off guard. THE DREADBOLT IS HUGE. I thought it would be a reshelled cousin of the  Courage Crossbow, but nope. It’s the same principle (bowstring power, arrows, etc.) but the Dreadbolt is a much bigger design, with a bigger shell and more comfortable stock. It has a lever action priming arm that pulls the bowstring back for each shot before you nock in the arrow, and you fire. While I can’t totally get behind any blaster that uses an additional type of ammo (it makes reloading during organized games more difficult if everyone is using darts) but as a standalone toy for hilarity and mirth? Sold. I look forward to this at final release as well.

The Judge was still a little finicky at the show, but it made it through all 30 darts (in varying distances) during my firing test. The blaster is RIDICULOUSLY huge, wider than my torso (at least my head) but leaves too much of an impression to not be curious about it. The darts are going to fly different distances each burst, but hopefully this will be improved even a little bit at final release. Big cartoonish blasters like this are perfect to “build your own story” in imaginative role play, as opposed to being considered a “war worthy” blaster. It’s oversized, it’s silly, but I can’t help wanting one based on the shock value of how massive this blaster is. Performance wise, I can’t get too harsh on it as the blaster’s still in prototype form.

100 shots! Hopper fed! Rival velocities! The Nerf Nemesis is huge. It’s battery powered with full auto, and there’s not much to say except announce how much I want one. I can’t imagine how this might change the game for some groups and people who are way below the output on this blaster. The only trouble I ran into needed me to shake the blaster a bit to get the rounds to load into the feed, but that’s minimal. Otherwise, the accuracy, rate of fire, and sheer madness of the blaster make it worth a buy but the price is a bit up there too ($99). As a paintball player, this blaster definitely blends worlds together, and I look forward to seeing much more of it at final release.

Hey all! JUST bought the Nerf Mega Mastodon, and while I need video, here are pics from opening the box! Assembly is not as bad as it looks, but make sure you have a screwdriver that goes far enough into the screw port on the battery cover. $79.99 at Target, and bonus cause there is a $10 off purchases $50+ @ Target right now. Happy hunting! 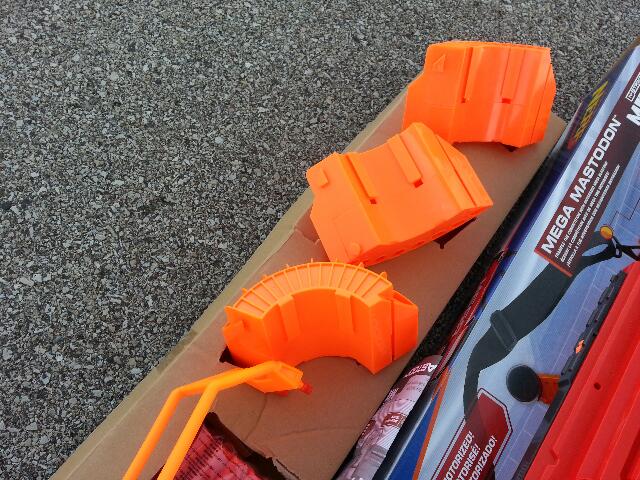 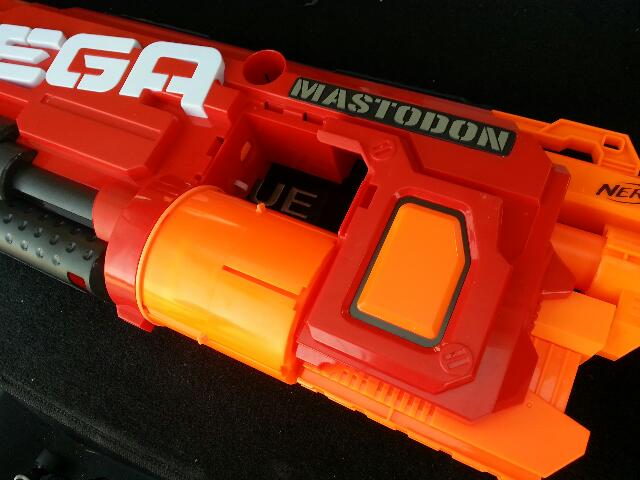 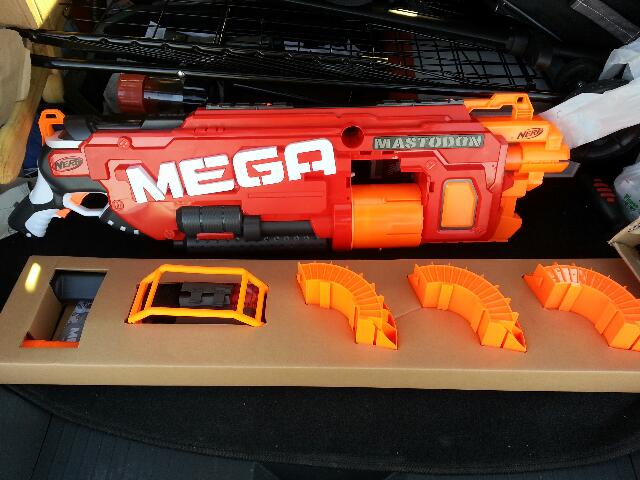 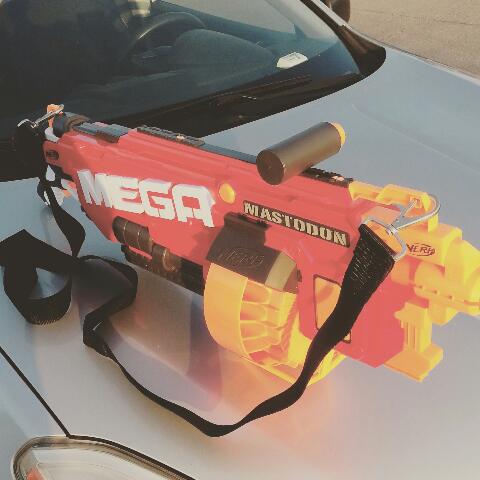