NOTE: Sample was supplied by Spin Master Toys (thanks to them!).  The opinions in this review are my own.

– Possible additions to put a new spin on your blaster gameplay.
Vas The Stampede 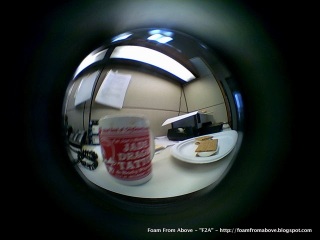 At $60 the resolution isn’t the clearest in low-light (a touch grainy), but surprisingly better than I expected in well lit situations (also given that this is for kids 8-13 years of age).  it is a fish eye lens, in order to encompass the “360” look attached to a swivel that moves within a 90 degree arc..  Initially, I had wondered if the lens would be remotely operated somehow, but that isn’t the case.  Where ever you place the camera, the lens has to be aimed ahead of time.  With the fish eye lens though, there’s little room for missing something.  Given the low profile of the camera alone, and even the housing/mounts, getting the right angle shouldn’t be a problem.  Obviously, any other additions such as a viewfinder or anything would add to the visibility of the camera, and the cost.  For what it is, it is a pretty good price for your homegrown spy in training.

The housing functions as a “hockey puck” style mount for the camera (see the video) and a container for the wrist strap, one of the little touches Spin Master does with its toys that I really like.

It takes a few hours to charge using the included USB cord.  I have used both my computer and other wall-mounted plugs with a USB connector, so you’re not stuck if you have other electronic devices.  The included instructions were easy to follow, and I was up and running (literally) with the camera in minutes.  Already having editing software, I just use the microSD card in my card reader, and that does the job.  I haven’t used the editing software myself (I already have my own), but if you do perhaps you’ll get a kick out of it.

Bottom line, I found it a lot of fun to try and see what angles, and just what the capabilities of the camera were.  Sliding the camera into position was hilarious, and various options of how to use the camera (wear, wall mount, super sneaky off the mount, etc.) might be a good time for a kid.  It goes without saying that the camera must be used responsibly, and those issues need to be brought up during purchase.

As far as game types go, I don’t know if I’d use this as a mount or anything to record gameplay, but if you came up with a spies vs. counterspies scenario, this might be something to play around with (having to record a document or something else; let your imagination go wild, for the 10 mins. the charge will last recording video)  With the speed that a typical game can run, I don’t think this camera could keep up, and there are full on cameras for a little more that might be better to use.  This is still a toy for roleplay purposes, but even with that, it is still an impressive piece of tech.