Nerf Big Ticket Items for the Holidays:
Vas The Stampede

There are 2 big items out there for Nerf enthusiasts and those that love them this holiday season. If you haven’t finished your shopping yet and have a big Nerf fan on your list, let’s look at the two biggest options Nerf gives you this year. “Nerf or nothin’!”

Both Nerf blasters are at a premium price, which is a lot to ask for when it comes to selecting a toy. What exactly are you getting into?

Say hello to the 2 big ticket items from Nerf this year. Let’s start with the Nerf RhinoFire. A descendant of the Nerf Vulcan, the Rhino is a big blaster compared to the other recent releases. Here is your new heavy weapons turret.

The RhinoFire has 2 mag wells, multiple tactical rails (for accessories), and a few attach points for a sling. There is a tripod that sits on the underside of the blaster. The RhinoFire tripod fits on the older Vulcan, so it is safe to assume the opposite holds true as well. Unlike the Vulcan, the front grip handle is a bit more in line with the form of the blaster, it doesn’t jut out and swivel.

The blaster is a big, double-barreled unit – the barrels alternatively pump when firing, and as some folks commented reminiscent of a turret. As such, there is a roleplay aspect to this blaster that in my opinion dictates the best practices when using the blaster.

Firing the blaster is a little different from a traditional setup, there is an orange tab on the back handle that does all the work – a little pressure to start revving up the flywheels, then fully press the tab down to engage the pusher arm…. and unleash foam. It is ESSENTIAL to rev the flywheels first, otherwise your first shot is going to dribble out of the barrel.

So yes, the RhinoFire is essentially triggerless, but that works because of the way the grip is styled. Going back to the “turret” look of the Rhino, the grip is styled for two-hand usage but also incorporates a t-style handle for quick carrying.

That’s right, carrying. When I used the Nerf Vulcan during games, I wouldn’t “run and gun” with it. As it was a “heavy” blaster, running with it felt awkward while trying to shoot. I would pick a spot, shoot, then pick up and relocate. Lather, rinse, repeat. I would avoid firing on the run due to the chains, and size. I was also firing from the hip, as the design of the blaster lent itself to that position. If I had to reload, it was a task switching out chains by myself and maintaining a stream of darts.

With a “turret” like the RhinoFire, it is important to separate shooting and running into separate actions. Run, pick a spot, provide fire, relocate. Lather, rinse, repeat. Additionally, firing from the hip makes accessing the firing button faster, just drop your hand onto it when you wanna shoot. A sling on the RhinoFire makes this firing technique quite easy, at least for me. One other caveat is… you’re going to want to carry a lot of mags. Either conscript a friend into caddying your ammo to make a 2-person team, be ready to lug around a bag and/or pouch to dump empty mags into (unless you’ve formed a zen-like mentality with your gear and don’t mind losing stuff.)

As far as what magazines to use… I had best luck with straight 18-round N-strike magazines. While the firepower behind two 35 round drums is impressive, the reliability just wasn’t there, darts would jam or dribble out of the blaster when using those types of magazines. Jamming was much more prevalent with larger capacity/rounded mags (including the included 25 round magazines, and the 18 round drum mag from an Alpha Trooper). The reliability issues could be due to age/lack of maintenance on the older, larger drum mags, but even the 18 round straight mags from the same time frame worked no problem. Ammo wise, I checked Elite Streamline darts and Elite Suction Cup Streamline darts in straight 18 round magazines and experienced no jamming issues.

The Nerf Cam ECS-12 is a bit more straightforward than the RhinoFire. As a semiautomatic blaster, there’s already a myriad of similar magfed blasters out there in the Stryfe and the Rayven. The Rapidstrike is a full auto “rifle” that is still available, which makes the Cam ECS-12 a tough sell, especially at that price.

So what are you paying for? 90′ range, and a 0.3 megapixel camera? The awesome aesthetics?

Let’s talk about the camera. It’s low-res, and if you don’t already own the Nerf cradle for a mobile device, a GoPro, or some other action cam with a mount (such as the Nerf branded ones from Sakar), then this is an option. But realize there are other, less costly blasters out there.

Here are some samples of the Cam’s still shots –

The camera’s not the best quality. But then again, given the blaster’s target audience (not including this blogger) the quality of the camera isn’t so much the concern of someone looking for a gift for the Nerfer in their family. And when I discussed the camera quality with Hasbro at #NerfAllAccess this past summer, in order to keep the Cam under $100 it was necessary to use something so low in megapixels. And again, if you have a camera already, this probably isn’t for you. But someone out there may get a kick out of this because it’s a 2 for 1 unit. Requires no additional screws, mounts, or similar extras. And it doesn’t interfere with using the sights on your blaster, as mounts tend to (unless you mount your camera under the muzzle.) This offers a streamlined camera to make recording unobtrusive.

Eeeeeexcept when it comes to noise. Unfortunately, the camera picks up a LOT of the whine from the flywheels when the Cam revs up, which can be distracting when reviewing footage and trying to edit any footage. Caveat emptor.

The range is questionable on the Cam as well. And yes, the box does detail in a handy graph on the package just how often the 90′ range occurs, but I saw most of my flat/angled shots hit around the 50′ mark, well below the advertised ranges. To me, it looks like it rarely hits 90′ but since I Nerf stock anyway, that’s not a big deal to me. If anything, I have more issues with the camera image quality and the audio pickup.

What I do like about this blaster is that while the stock isn’t modular, it is definitely one of the more comfortable blasters I’ve used in recent history. I prefer using a foregrip on it, and it is a comfortable hold. However, I can only speak for myself. Ultimately though, I see this being more of a gift for Nerf enthusiasts just getting started in the hobby, or from relatives getting their family Nerfer a present. More hardcore enthusiasts might not find much interesting or useful, given they already own a camera or have a less expensive blaster that performs similarly.

Final verdict: If I had to choose between either blaster, I’d select the RhinoFire. It’s arguably the more diverse of the two, and offers more bang for the buck. More shots per reload (depending on your loadout), different feel from a lot of the rifle/pistol variants out now, and it’s overkill. While you’re not as mobile with it, I see a lot more people having a lot of fun with this blaster later on long after the wrapping is tossed and the boxes are broken down.

Hope this was helpful! Enjoy the remaining days of your shopping window 🙂

Enjoy a couple pics of the Nerf Rhino-Fire – will update this post with better quality photos and a few initial thoughts on the blaster tonight. 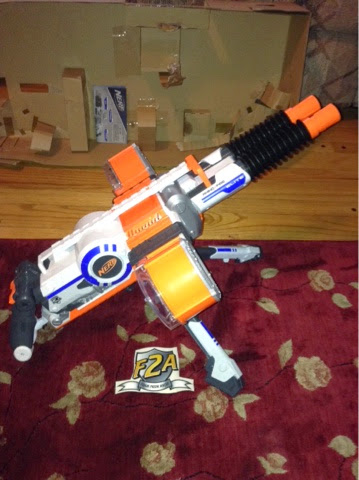 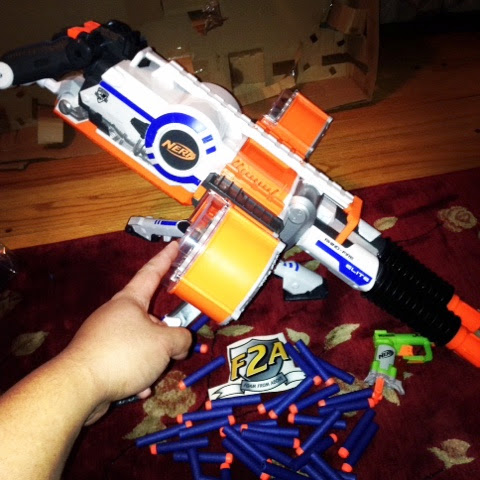 A user on Instagram posted a Rhino Firing video, check it out here – http://instagram.com/p/qeYUzhlq-b/

Confirms the barrels “pump” and alternate firing, a bit tough to see the trigger setup but looks like there is one, but two handles. That is possibly the accelerator trigger on top. Hopefully we can get a better look in the coming weeks!