Ok, so I’ve managed to put a few discs through the Vigilon and now for some quick thoughts:

– Range/ammo flight path: Surprising! Like anything of this medium (foam) the accuracy dips the higher distance they travel. I had a bit of a breeze behind me and you the discs kind of glide up and down with the wind current. If you throw frisbees ever you know what I’m talking about. The discs never floated to the ground from what I could tell, though. They would slice left or right to the ground. Interesting though, I can only really comment once I get them to a stock game. I imagine aiming’ll be interesting using this.

– The blaster: The Vigilon is pretty comfy. I’d liken the size of it to a Recon, but it’s a bit wider obviously for the discs. The internal magazine opens up at the touch of a switch (positioned on both sides of the blaster)by the grip; so it’s easy to reach with the thumb. I wouldn’t expect to holster this… but there is a loop for a carabiner or something at the bottom of the handle. Tac-rail on top, and a wide muzzle for the disc makes for an almost cartoony-sized blaster but it pulls it off. Should a disc jam in the muzzle, there’s a release switch on the right. Didn’t have a jammed disc yet so haven’t had to use it yet.

No need to worry about the disc falling out if you face it downward after priming; the disc stayed put while running around after it was ready to fire.

The Vigilon is a little short on capacty (5 shots at a time) but the reload mechanism is pretty slick. It’s handy to just have to grab five discs, stack them, and put them in the internal clip at one time than reload each individual chamber or one after the other (as with the Specter, Maverick, or Speedload-6).

Price is $15.99 and considering the alternatives out there is not too much considering the range you’re also getting. While I’m hesitant about the discs, I’ll definitely be able to say more as I have more time with it. Worth a look for a midrange blaster to try out this new ammo type, for sure. It’s easy to carry and doesn’t require extra clips to carry around (like the nitron and praxis) so if you like to pack only a blaster and ammo, this’ll be the choice for you.

Test firing the Nerf Vortex Vigilon LXR disc shooter! Right off, it looks like it’ll work for lefties and righties (except that the door only opens on the left side of the blaster). I’ll have a more in-depth look and better firing test soon. It comes with 5 discs, user guide, and the blaster.

Interesting note, you can prime and run the Vigilon without the disc falling out.

(HASBRO/Ages 8 years & up/Approx. Retail Price: $24.99/Available: September 10, 2011) Go the distance with the new NERF VORTEX PRAXIS blaster! Designed for long range disc-shots, this pump-action blaster features a 10 disc clip, removable shoulder stock and Tactical Rail System. Compatible with all VORTEX and most NERF N-STRIKE Mission Kit accessories like scopes and sights (each sold separately), the Tactical Rail System allows users to create one of the most epic N-STRIKE and VORTEX blaster hybrids yet! Available at most major toy retailers nationwide and HasbroToyShop.com on 9.10.11

When you need that last shot to secure success, grab the compact NERF VORTEX PROTON blaster. This single-shot blaster comes with 3 VORTEX discs. Simply pull out the back chamber to load one of the discs and blast away even while you’re on the move No batteries required. Available at most major toy retailers nationwide and HasbroToyShop.com on 9.10.11

In a heated NERF blaster mission, there’s no time to waste. The NERF VORTEX VIGILON blaster offers rapid-reload capabilities and features a built in disc clip. Simply release the drop-down clip with the push of a button, place in up to five VORTEX discs, and activate the pull back mechanism to fire. The VORTEX VIGILON is also compatible with the NERF Tactical Rail System and most NERF N-STRIKE accessories (each sold separately). Available at most major toy retailers nationwide and HasbroToyShop.com on 9.10.11

The pistol – the Proton! The box art is a lot more serious looking, if that were possible with Nerf blasters… hah! Also you see a better view of the disc ammo, the indentation to make it look more like a frisbee.

The Praxis, that was previewed in the initial demo video! The disc magazines are going to be 10 shots here, and this is the manual pump-action blaster. Informative box is informative.

First full-auto? What about the Vulcan? Oh wait… first full-auto DISC blaster… The magazine here looks a bit bigger than the 10 shot that comes with the Praxis and there’s a scope and foregrip. Disc successor to the Stampede? Most likely!

In the demo videos, there was a blaster with an internal magazine. This, is that blaster. Possibly the Recon-ish feel mid-size blaster? Rapid reload makes me wonder if there might be a speedloader accessory in addition to the magazines.

Heads up! The Nerf Facebook page has released a third video, and this time it clearly the depicts the Vortex blasters in all their resplendent youtube glory.

The names are official – Proton, Vigilon, Praxis, and Nitron – nothing new there. The video gives a 360 of each blaster though, and I am particularly intrigued at the way the muzzles look to accomodate the new disc ammo. Below are some screen shots:

The blaster with the internal clip – the Vigilon! Looks to me the size will be pretty close to a recon.

Self-explanatory! Man, look at the size of that magazine. 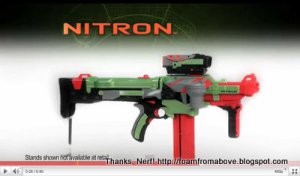 The blaster we saw in the first video – The Praxis! Oddly enough, no magazine is pictured with it. Pump-action, and judging from that first video pretty awesome range. 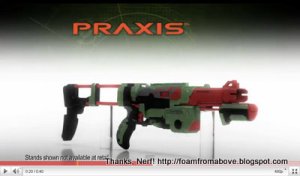 The Proton, the pistol entry of the line. As shown in another preview video, this blaster has a slide that pulls out, providing the spot where the disc loads and primes the blaster. 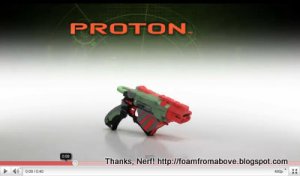 Ok, are we good? You all had enough time to let it all sink in?

The Nerf Vortex big reveal has come and gone, we’ve seen the video and there’s promise that as time goes on, we’re going to see more. More photos, more videos, and more general info. In the midst of all that we still have the N-Force Vendetta double-sided sword on its way, and the Gear Up series in August. And then… 09.10.11. Vortex in all its disc-firing glory starts coming out in stores.

So what did I think of the video? What are my opinions on the Nerf Vortex blasters?

I’m intrigued. New clip system, new ammo style, and the shells look pretty cool too. The colors seem a darker color scheme I think than any previous N-Strike line, with its red and green majority, to add to the “N-Strike Vs. Vortex” business.

The first proper look they showed off was a pistol with an integrated clip, and what looked like a pistol on the ground. After showing the integrated clip opening, the video moved on to the firing test of… something? I think it was the “Nerf Nitron” firing, and uses a removable clip, foregrip, and I believe I saw tactical rails. Pump action seems to be the priming mech of choice on this as well. What I noticed most? The range! And for a disc, that seemed to fire pretty sraight out of the barrel. Normally you can expect a disc to curve a little even indoors (as far as I’ve seen) and that wasn’t the case. Revolutionary “XLR” tech? Haha, I think that might stand for “eXtra Long Range” but that’s unconfirmed. Either way, it looked pretty cool.

Here’s the thing, some of the chatter ragging on the Vortex series is about the discs, how streamlines fly better and aren’t as affected by the wind as drastically as discs will be.

Are you all on crack?

I’ve seen my fair share of stock darts get blown all over a park and knocked off course by feet because of the winds here in Chicago. It’s a moot point. Real ammo, foam, it doesn’t matter. The wind interferes with all kinds of ammo in different ways, and that’s just fact. Streamlines already were notorious for being inherently inaccurate, why are they all of a sudden flying straighter than a ruler it seems? Never mind the discs have a wider surface area, so to me that says they’ll have a better chance of grazing their targets. I figure the discs might resemble what they did with the ammo of the N-Strike Disc Shot, a tougher type of foam core.

The blasters look cool, as I’ve come to expect from these latest tacticool offerings from Nerf with N-Strike and the Nerf Nitron looks pretty sleek.

1) Nice appearance
2) Pistol, middle blaster w/integrated clip, rifle kinda blaster w/removable magazine, there has to be a fourth I’m missing. Unknown capacity, but if the discs are skinnier than darts these might have a higher ammo capacity than N-Strike by quite a bit.
3) Nice ranges from what I can tell, a lot more than they’ve allowed with darts.
4) Not worried about the discs being blown off course. Nerf ammo generally does anyway.
5) I’ve heard the terms “serious Nerf war” and “fun to just play around” tossed around a bit. THESE ARE TOYS.

I’ll definitely do a more in-depth study of these blasters once September rolls around and hopefully I can get my hands on them promptly once the release – but I’ll hold off any total judgments until I actually see them for myself.

Check the “Nerf Vortex” tab. The video features a rifle-looking blaster, with a clip, that fires discs. What you see might be called the Nitron and I think I see a pistol on the ground as well. Enjoy the video, and I guess we’ll see more popping up on the Nerf Facebook page as time goes on!