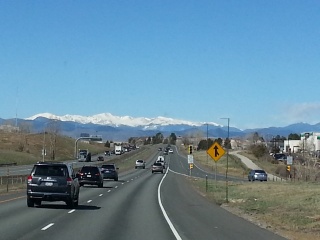 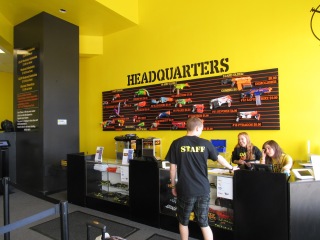 BASIC STATS:
Dart Warz
Locations (US):
Meridian, ID
Colorado Springs, CO
Centennial, CO
Wichita, KS
Pricing:
Varies by location: see website – DART WARZ
Banned blasters?
Yes – see website
Socks/Shoes during play?
Socks
Dart Warz! One of the first arenas I ever heard about, but also definitely the first franchise I ever heard about. Randi and Stanton W. were nice enough to fly me out for a night to experience not only their arena(s), but to try my skills playing on one of their teams for their proprietary tournament, NDWA (National Dart Warz Association.)
As it stood, I met staff from the Idaho location, but had the privilege to look at the Centennial and Colorado Springs locations in the scenic, lovely, state of Colorado. Each location had 2 arenas (with enough square footage to accommodate modern Nerf blasters that hit 40-50’ flat, if that’s helpful), littered with obstacles, pro shop, rental stations, safety briefings, DJs playing music, open play, private games, things like that. It was a real neat setup to see in person. I believe each play area could accommodate up to 40 players on each field, and I can only imagine the chaos THAT would look like.
Dart Warz has rules, as many competitive style places do. One rule is, you play in socks. In order to preserve their floors (foam mats), they ask that players wear socks during play. It took some getting used to for me, but after a bit of time it wasn’t a serious problem. Different, yes. A deal breaker? No. The games also have referees, which removes the honor system in place for a lot of Nerf I played in the past, at least most of the time. Refs are still human and you might think a call gets missed, but just play through and get it the next time. Either way, it’s definitely nice to have the refs there in the first place. There are also special house rules, some special house game types, but nothing I can really go into detail here. Must be experienced! But I had fun and the games we played ranged from the familiar to the alien, and it was great to see a bunch of new (to me) ideas at play. House rules such as bunker destruction, “grenades”, and precision targets as objectives were all fun to participate in, especially in large team games. Players were allowed armor and shield rules as well, which added another depth of tactics for some game types and situations. 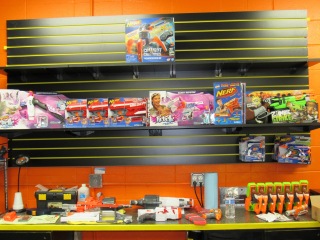 The obstacles were sturdy enough, and the field layouts had decent movement, cover, firing lanes, choke points, and so on. Once in awhile the field arrangement seemed a bit favored but for the most part they worked. Dart Warz at the time was still using Vortex blasters heavily, which added an element of surprise, due to the curve of the discs around cover. Many players really liked Vortex, and remarked they were sad to see it fading even then. The Pro Shop had Dart Warz emblazoned gear, including socks, shirts, and headbands. Blasters were rented from a base tier to more expensive tiers, and I think a chronometer was available for “xtreme” (modded, blowguns, etc.) league play. Yes, that’s right, league play. Either way, the facilities and business models appear to have an option of foam blaster play for all ranges of interest in the hobby, from people just getting into it to heavy modders (within reason).
The NDWA tournament itself was an intense affair, pitting the skills of staff from the three arenas against each other in a variety of games, both blaster and melee (with foam swords and other weapons) oriented. Objectives had to be met, flags raised or captured, and within a time limit. Points were awarded based on performance and ultimately one store’s staff would lead in points, but ultimately everyone is still one big Dart Warz entity, just there to have fun and meet the other staff. I had a good time talking to some folks and seeing how they developed their play styles within Dart Warz, and definitely took home some ideas to tool around with in my own games. I flew into the tournament blind, ultimately, and used a Cycloneshock for the duration of the tournament. Opting to step out of my comfort zone, I went with a Mega blaster with slam-fire, and it served me well during the tourney. My loadout consisted of that, my ammo pouch, and my eye protection. It was kinda liberating to not rely on my “favorite” blaster and just go with what I could, a little extra difficulty for me, but an element of the unknown that makes stepping into an unknown playing field with an unknown opponent even more interesting.
I regret I only had a day to spend playing at Dart Warz, but what I did experience was different from my usual park pickup games. And it was a lot of fun all the same trying out something new and seeing how a place like a dedicated Nerf arena might operate, in this case the Dart Warz model. The fact that three stores operate under this brand show there’s some interest out there, and it’s interesting to know that within 3 years of emerging they’ve grown even this much. Yes, it may be a little more rigid than internet organized games and meetups, but places like this forge their own niche in the hobby, as well as introduce the idea of blaster games to a larger more regular and accessible audience. If you have one in your area, it’s definitely worth a look at least once. SUPER BIG THANK YOU again to the staff and owners of Dart Warz, for bringing me out and putting me up for the night to have this experience. It was a glimpse of something new and different for the hobby, and as a proponent of varied play, I am totally fine with that. Have blaster, will travel.
Questions? Comments? Any facets of the place I missed? Let me know!