Friday Five: 5 Nerf Features that I wish would Make a Comeback
VasTheStampede

With the new Nerf Rebelle Cornersight coming out later this year, I was reminded of the old school Nerf Sneakshot. What other old school features would I want to see come back? The list above, and the explanations… are below.

BLAST BUTTON – Many years ago, Nerf made a blaster called the “Blast Fire” or “Blast Fire DX” (depending on which version you got) which had a neat little feature: you would prime the blaster, pump the air (5-6 times, maybe more), and you had either 5 shots in quick succession or could hit the “blast” button on top of the blaster to shoot all/remaining darts at once. It was a cool shotgun effect, and one I wish they would explore again, even though in the current line I’m not sure it will. Nerf did multishot a couple of years ago, but it wasn’t quite the same as this, or the Hornet that followed, and the Lightning Blitz which didn’t even bother with a single shot function.

SEMIAUTO SPRING BLASTERS – During the Nerf Dart Tag line (black and yellow incarnation) there was a really cool pistol called the Sharpfire (yep, same name as the modular pistol out now) with a semiauto/power selection option. Yep, true semiauto trigger pull fun! No priming, no pumping, no accelerator trigger, just squeeze the trigger. The blaster could go from a higher power/slower trigger pull to a weaker setting/faster Rate of Fire setting, but it made dual wielding easy, and quiet (no motors, ma!) Nothing else has come out since then with a true semiauto function again though, and that’s kind of a shame as I thought it was a really fun blaster. Unfortunately, one of the ones I bought didn’t have the same power as the other no matter what setting, so there were some manufacturing issues it looks like on this blaster and given the mechanics involved I’m not terribly surprised. Still though, I would love to see something along these lines again. 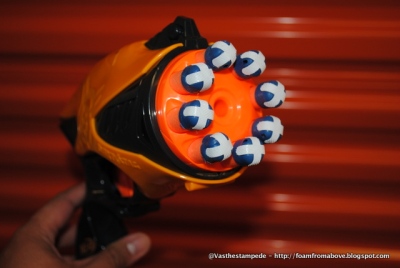 INTEGRATED CLIPS – Yes, yes, I know the Han Solo blaster is out now, the Rey blaster, the Mega Magnus, etc. but the integrated clips from the black and yellow Dart Tag line (on the Speedload 6, Quick 16) were really interesting and I found them to be a lot of fun. For starters, the Speedload and the Quick didn’t have to prime before loading. A lot less clumsy of a mechanic than the other current blasters. You could load the blaster, prime it, and even get an extra shot out of it (much like you can with the Fusefire, if you have one). I got to the point where I could feel the breech and just load the blaster without even looking at the clip while running; with half the blaster pulled out for the Magnus and co., that’s a bit more fumbling around if you ask me. The dart tag blasters of this line were much considerably bigger and thicker because of the clip and the positioning, and the clip had jam issues (the best darts were blue tipped dart tag darts, even the older dart tag darts had issues loading with these new blasters), so hopefully if Nerf went back to this design it would come back stronger than ever.

INTEGRATED “SECRET” BARRELS – Nerf made a couple of “Secret Shot” blasters waaayyyyyyyy back, which had the main shooting barrel, but also a hidden second barrel either in the handle or on top. The first Secret Shot was a spring pistol, the main barrel in front and the version with the handle in the bottom. If you didn’t know what it was, it looked easily like an ammo holder. But then if you were in a game and went with the “I surrender” well, much hilarity was to be had if you made the shot. 🙂 The Secret Shot II was an air blaster that had a flip-down barrel on top that you could use after firing the first shot, but had to pump the blaster again between shots as opposed quickly pulling a priming arm. There’s the Rebelle Secret Shot now, but there’s no hidden barrel, just the flip-out function of the blaster itself. And I don’t consider blasters like the Modulus stock blaster as part of this classification because it functions as a separate blaster, and has to be removed before shooting. Especially the Secret Shot I, this function was fun, but also pretty sneaky, and I like that.

PUMP BLASTERS (non-slamming air blasters) – There used to be plenty of these, blasters you would pump, and then pull the trigger to fire, and I already mentioned a couple (see the beginning for the Lightning Blitz). Air pump blasters were slower because of the pumping action needed between salvos or shots, but they were super satisfying in some cases, too. Hearing the “pop” from an airtech blaster as you shot was nice (the 2000 was a popular one) and you almost felt like you got some real range stock. The Super Maxx 3000 was another good entry with this functionality, and for awhile was a primary of mine until wear and tear got the better of it. Nerf gave the fans what it wants in speed though, and possibly reliability (air bladders and seals were problems for these blasters as they got used) with the current spring/flywheel lines, and so the only real air blasters they use are those that “slam” function, like the Demolisher missile launcher, the Thunderblast, and one of the attachments on the upcoming Tri-Strike. Gone are the days of shooting 20 darts from a Wildfire, then scrambling to reload WHILE pumping the air back into the blaster. At least, from Nerf blasters.

Buzz Bee still has their “Air Warriors” line full of new air pump blasters, including the “Destiny” as featured below. Previously, they also made blasters like the Range Master and even the popular Panther which utilize air pumps in their play pattern. Hope for air blasters like this are not gone, just elsewhere.