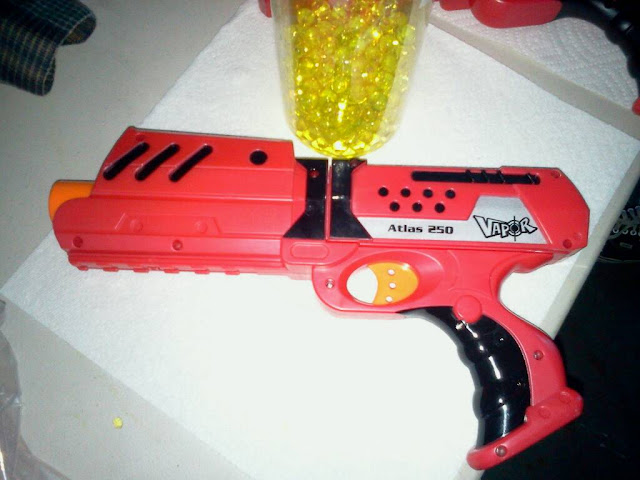 * Length: approx. 12” from tip of muzzle back of blaster

Say hello to a new entry in the blaster category, the Vapor Atlas 250. A pistol, vibrant red colors, and very good ergonomics. Brought to you by Razor (http://www.razor.com), better known for scooters and other vehicles, the Vapor line is their attempt at bringing a new way to play when launching projectiles at your friends. And no, it doesn’t mean you get to mount a blaster onto your scooter or motorcycle.

The blaster is a single shot pistol, but with a twist. It has a hopper on top with a small door and holds about 50 “Vapor Gel” rounds (more on the ammo in a bit). The priming action of the blaster is a slide on the back of the handle pulls back and primes the blaster, opening the breech in the hopper that loads a sphere into the barrel. The slide must be pushed forward back into place to seal the breech and allow the trigger pull. The action is as follows: pull the slide back, push it forward to original position, and then pull the trigger to fire the round. Experience suggests giving the blaster a little shake to ensure proper loading of ammo.

Don’t worry about ammo falling out of the barrel, either. A little trap door opens at the front of the barrel when you pull the TRIGGER, allowing the gel ammo to fire but keeping it in place while running around.

The blaster is advertised to hit up to 60’ but you’ll also get anywhere from 40’ to 50’ as well. Fired level at the shoulder, the blaster was getting around 40’. The ammo did hook a little left or right but for the most part the accuracy decent from 40’ and closer. Above that made aiming a bit trickier to compensate for movement left or right reliably. Having used foam blasters for so long, I’m already used to 30’ out of the box so this was pretty normal performance for a toy, if not better.
The instructions tell you that the blaster operates best when the hopper is filled to 50% or better; and they’re right. I experienced some instances where I would fire the first 30 or so shots pretty consistently, but after that the blaster would misfire. This means that I would prime it but a round wouldn’t load. Also, it’s better to prime the blaster only when you’re ready to fire. It was even odds if the blaster experienced any dip in performance if primed while running around or primed after running and/or rolling.

All this said, you still have around 50 shots to use before having to reload at a pretty good distance. That’s not too bad and beats a few of the other same types of pistols out there, capacity-wise.

The ammo seems a bit bigger than the Xploderz ammo, but time is the biggest difference in this case. The manual does not include any growing instructions for the ammo. The Vapor gel rounds are to be sold ready-to-use with no waiting. The Atlas comes with 250 round ready AND the blaster for $15, and that’s a good number of reloads right there. As indicated in the instructions if the ammo is kept cool and out of direct sunlight, it should stay usable for a long time. Only if it shrinks is when a 3 hour waiting period comes up which is unlikely if you are using your Vapor a lot.

The ammo dries almost immediately when it breaks apart, and does not stain clothing. I fired the shirt onto a white shirt, and the only noticeable change to the shirt was it seemed hardened where the Vapor ammo hit. Easily washed out. It would be interesting to see if this medium would work indoors on a gym floor considering how quickly it dries. The bright yellow coloring also made it easier to spot flying out of the barrel. One thing was the ammo breaks apart sometimes on firing. This is an inherent issue with the ammo type but hopefully can be addressed in the future. Maybe being left to soak or in outdoor heat are contributing factors to the Vapor ammo integrity. If you need to store the leftover ammo or want to carry additional ammo, a simple empty bottle will do just fine. If possible, get one that won’t crush easily, to be sure your ammo stays undamaged while inside it.

There is a bit of a sting when hit from approximately 20 feet out, but no worse than anything on the market right now (spitwads, foam darts). Against instructions I put the barrel right against my skin and fired. There was a small ring on my skin but nothing terrible. Therefore, you have approximately the pain factor of a foam dart but with a higher rate of fire than most foam blasters of this size and comparable range. This will be interesting to see with higher-powered blasters that have range AND high capacity.. The real test will be visually spotting if a player hits their intended target, but some initial testing shows there is a visible splatter most of the ammo when making contact most of the time. This is still less painful than paintball or airsoft, a plus for some families and even users who can’t afford to get black and blue every weekend.

IT HAS A TRIGGER. WOW. FANTASTIC. This makes operating SO MUCH EASIER. The Xploderz blasters (which use the same ammo) were awkward to handle with the pull-handle. I found my hands would jam together, or it was tough to aim while holding the priming arm down. The trigger and traditional slide action make using the Atlas so much easier by leaps and bounds. The pistol is also very streamlined, and comfortable to hold so holstering and drawing the blaster worked just fine. It slid in and out of my grabit pack easily, if you need a comparison. A very comfortable blaster and I was very pleased with how the Atlas handled and its portability.

* Vibrant color (this is arbitrary to me, I like brightly colored blasters and other users going for the milsim experience might not).
* Handle is comfortable
* Biodegradable ammo; no staining after getting hit
* Easy to slip into my pocket or holster
* Lots of ammo included in blaster
* Easy to carry
* Trap door on the front barrel is a nice touch to prevent losing ammo while running around with a primed blaster
* Slide action is comfortable to repeatedly perform unlike some blasters with a similar mechanism

* Nothing included to carry extra ammo
* Ammo would break apart in-flight
* Not a noticeably refreshing water blaster for hot summer days (drenched vs hit with a small splatter of water)
* Harder to spot hits at long distances (with the ammo, the blaster itself still keeps the action up close and personal)
* Natural tendency of many might be to run around with the blaster ready to fire which might reduce performance vs. running, prime and shooting
* Some misfires and jamming, but only when really low on ammo in hopper as the instructions indicate

Stay tuned! The blaster will be available this Fall, and I’ll be coming out with videos and demos of it pretty quickly! Also, something big this way comes labor day weekend in relation to this blaster…

Definitely worth a look when these are available this fall!