Imagine if you will, a time back in February. 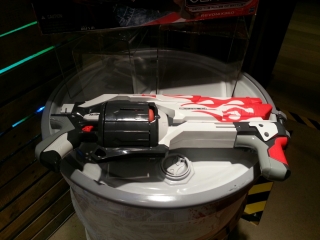 and FINALLY, recorded these:

So after a long journey that started at New York Toy Fair 2013 to July 2013 I finally saw a full production Nerf Vortex Revonix 360. 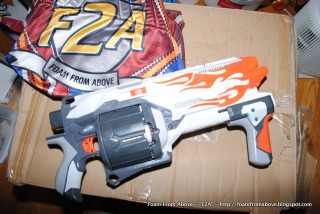 Well, I like it.  I was a big fan of the Nerf Vortex Pyragon when it came out, mainly because of the level of firepower it packed.  Sure, the reliance on magazines is a sticking point for me in protracted Nerf games, but the slam fire was smooth, it looked good, and felt comfortable with a Nerf Super Soaker Lightning Storm stock.  And the Revonix?  Worth the cost.  A big blaster (almost reminiscent of a grenade launcher, honestly) good range, and comfy to use, especially with a stock.

BUT, it takes a little getting to know.  First thing, as Adult Fans of Nerf likes to say, the thing is a blaster you can reload on the run, like the Dart Tag blasters that have integrated mags (Quick 16, Speedload 6 come to mind).  And the reload takes some practice at first but if you can manage it, you’ve got something good here.  I always appreciate a loadout where I am boiled down to a player with a pouch full of ammo and a blaster by my side (anyone see what I did there?)  One must be familiar with the feel of their blaster to keep loading while running around, while also keeping your eyes on the field.  It’s good to know where the magwell is by feel, and turrets, and so on.  Those brief seconds you spend looking down could get you tagged.  I was able to work it out with the Dart Tag blasters, I’ll have to do the same here with a little more field time.  Initially, it feels easy to fumble discs or slow down to search for the loading points (especially since the mag drum freely spins around) but just keep at it if you want this to be a primary for you.

As one of the videos above shows, the Nerf Vortex Revonix 360 loads through a divot on the left or right side of the blaster, and pumping the handle primes the blaster to fire.  Holding the trigger down while pumping the handle activates Slam Fire.  Needless to say, that’s basic nerf knowledge, I think.  But eventually you too will go “click click bamf!” when you light up your opponents.  Maybe.  Ultimately, the slam fire on the Pyragon felt just a bit smoother than the slam fire mode on the Revonix but I think part of that is the new mechanism (this loads discs vertically and pushes discs into position, the Pyragon discs were already horizontal and didn’t need any additional adjustment from the drum mag or the firing mechanism.)  However, that is practically splitting hairs.  Both blasters send out a bunch of ammo REALLY FAST, and a cloud of discs can be a scary sight during a game.  Maybe even scarier than a cloud of darts.

Should the blaster get jammed, there’s a disc release and the jam door (both pictured)  I believe Mr. K at AFON pointed out this is the first/only Vortex blaster to have one(?):

As for the range, I was hitting 50′ – 70′ with discs.  Not unexpected, considering that is the deal with Vortex line, hitting high distances.  The only caveat here is the accuracy (as with most things Nerf and maybe especially Vortex) may lack a bit.  The videos above show how hard it is to hit a reliably accurate point the farther you are from the target, and that’s even more noticeable with the frisbee styled vortex ammo.  Not to say I haven’t had success with this blaster, but it adds a little bit more of a challenge.  However, that is also a Vortex blaster’s strength to some degree, the unpredictability when trying to avoid a hit.  A duck or sidestep that would normally get you out of the way ends up sending you into the path of a disc.

That craziness is part of the reason I really like the Vortex line.

The paintjob is striking, for sure.  While the Vortex line has a new deco for 2013, all flame-styled in a way. 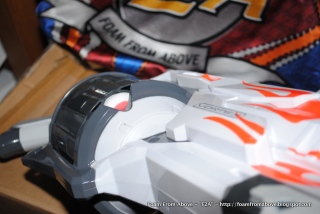 And it works for me.  I honestly very rarely go “WHOA” on a blaster’s paintjob but this does look cool all the same.  The main body is very vibrant with the white and orange accents, and the grey just works with it in my opinion.

So for $39.99, is it worth the purchase?  If you prefer having the full 40 shots from a Pyragon, and prefer to not reload one at a time (even on the run) then you might not get a lot out of this blaster.  I find the reloading mechanism unique enough that when I am on the field and hurriedly running around collecting my ammo to reload, (if the round is still going) it is MUCH faster to just load a turret than load a mag, and slam it in.  Granted, you can carry smaller mags if you’re using a Pyragon but then that’s still additional weight you have in your loadout as opposed to just a pouch/pocket full of discs.  So, player, know thyself.  The performance was on par with the Pyragon though not as smooth on slam fire, and reloading without additional magazines is nice.  This being Vortex discs you might have accuracy questions, but the ammo output just might compensate (Spray & Pray, my friends.)

If you like your Vortex blasters those are probably the best selling points about it.  Hopefully, I’ve been helpful in making a decision.  If you have questions, feel free to shoot them my way, and good game!

5 PM!  I think EST (their HQ in Toronto, Canada, after all) so plan accordingly!

They’re at 41k now, so the kickstarter campaign with 10 days to go is ALMOST THERE!  Here’s hoping this contests puts it over the top.

All you have to do to enter is:
1) Share this post on your wall and encourage your friends to check us out and buy a blaster. Tag a friend you think would like our page!
2) Tell Kickstarter on Facebook or email (press@kickstarter.com) what you love most about Tek Recon (be sure to tag us).

Monday morning we’ll announce the 2 random winners so make sure we know you’ve entered and done the above!

So head on over there and get entered! Don’t forget to tag Tek Recon!

Tek Recon released a first look at the beta of their gaming app today, showcasing how the devices will interact in gameplay and a peek at some of the powerups, scopes, sound effects, gametypes, AMMO COUNTER, etc.  I’m really curious how the Medic and Drone powerups are going to work, as I’m assuming hits and removal from gameplay is still on the honor system.

The other question is will players have to use their data plans when wi-fi isn’t available.  And if the “host” of the game’s device freezes up, I assume the game drops out?

All in all though, the Tek Recon line is looking sharper and sharper with each update, and on top of that they are now just under $20,000 of their goal! (As of this writing, they are at $34,000.)

Some other quick notes – if the original metallic green isn’t your color, check out the “Agent Orange” pack (as suggested by a backer, showing how Tek Recon once again is taking early feedback very seriously)!

Don’t forget, continue to email/tweet/Facebook kickstarter to get Tek Recon on their weekly email blast!  It’s going to need all the help it can get to hit goal to finish the race!

Got word of this from the fine folks at Tek Recon – they’re launching a little early, and ON KICKSTARTER.  I’ll let them explain in the press release below.

“TEK RECON: BRINGING VIDEO GAMES TO LIFE!
One of the most anticipated product launches of 2013 hits KICKSTARTER on May 9th

TORONTO, May 8, 2013 – TEK RECON, one of the most anticipated new product launches of 2013 will be available for the first time through KICKSTARTER.COM on May 9th @ 8am eastern standard time.

The goal of the KICKSTARTER campaign is designed to further enhance the development of the TEK RECON blaster and free app, and to get the product into the hands of early adopters and key influencers helping to create the first real life online video game. Through the course of 31 days fans will be able to fund the project through purchasing product, exclusive rewards, and bid on great prizes that include appearances in the television commercial and an all expense paid trip to present at E3; all contributing towards our KICKSTARTER funding goal of raising $50,000.

“Bringing TEK RECON to market through this KICKSTARTER project is the most ambitious and exciting launch in our company history,” stated Brad Pedersen President and CEO of TEK RECON Inc. “Two years ago we set out on a mission to bring video games, online connectivity and social interactive play together through innovation and great product design. The outcome, TEK RECON has come to life and created a phenomenal play experience that has exceeded our expectations.”

Gamers, adventure seekers and fans of technology, we need your help to create a revolutionary new way to connect and play video games with your friends IN REAL LIFE! Get off the couch and into the game with the newest and most realistic way to blast away on the field or anywhere. TEK RECON Blasters feature a first of its kind design with real trigger action and specially designed reusable “NRG Rounds” that blast up to 75 feet.

To optimize the battle and team experience TEK RECON developed a free “Real-Life Online Gaming” app to enhance blaster battles. Simply connect your mobile device to the blaster to bring video game styled play to life through mobile and GPS technology.  The free TEK RECON App will be available for iOS and Android devices, enhancing real battle experience through an interactive heads up display, live chat, vision modes, and more.

The time is now to be one of the first to experience Real Life Online Gaming and change the way you play. For more information on this product and KICKSTARTER campaign please visit TekRecon.com.”

So there you have it.  On May 9th Tech4Kids (makers of Tek Recon) is willing to let fans endorse the product, assist in the development, and in return you can get the blaster early, or any number of other bonuses, including possibly a trip to E3?  Interesting, indeed!

Tek Recon wants to make sure they get the blasters done properly, so here they are opening up to the wonderful world of crowdfunding.  Their kickstarter page launches May 9th, so if you’ve been yelling “TAKE MY MONEY” since news on Tek Recon first came out, here’s your chance.

Between the interactivity of the mobile app, the new ammo type, and some of the neatest touches when it comes to aesthetics and user experience, I’m intrigued to try it out and see how it all works.  I’ve been itching to get a more in-depth look at this since New York Toy Fair, and it looks close, so, so close.

I’ll post the link once the kickstarter goes live and definitely keep an eye on Tek Recon’s Facebook Page.

Onward, to May 9th!  And good luck to Tek Recon in making this work!

Thanks to Extreme Nerf for the heads up on these videos – a couple of them about the Nerf N-Strike Elite Alpha Trooper!  Recently posted, and it’s in German, but the posts are out there.

Demo Range-testing/Firing of sorts:  (angled a bit, some wind, but pretty cool all the same)

And again, thanks to Extreme Nerf for finding and sharing.