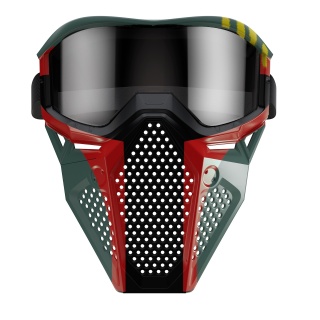 There you have it. (Images here were initially provided by Nerf, I didn’t get to write this piece until a little after receiving the email).
Licensed reskins aren’t new for Nerf; some might remember the Nerf Optimus Prime and Bumblebee blasters from San Diego Comic Con awhile ago. This time, Battlefront II gets the honors; Boba Fett is the color scheme and the Nerf Rival Apollo is the blaster of note.
It’s same to assume that there isn’t a notable change in the performance of the blaster, it’s a Nerf Rival Apollo that is still readily available at Amazon. The mask is a repaint of the red and blue masks already available as well (associate links below).
At first glance, I would be remiss to not say that this looks cool, no doubt about it. The color scheme of the Mandalorian bounty hunter comes up nicely on the images at least, and I knew enough people that used Star Wars voice changing helmets years ago during Nerf wars that these are a more functional change of pace. The fabric patch, reusable box, it’s all neat.

But that seems to be about it, neat. The $89 price tag is a real sticking point for me, considering you can still buy a Nerf Apollo and Mask separately for considerably less. And yes, you have extras included, yes, creating a tooling mold for a new product takes time, developing a whole new blaster for a collectible that may not sell is a risk, but this seemed the path of least resistance in some ways to just slap a new paint job on an old blaster. Reskins aren’t new practice either, but for $89 I need something new besides a paint job to cough up my money for something like this. Some different priming method? A new shell? This set seems mostly for Star Wars fans and Battlefront fans who will see the cool factor in the form more than the utility – not the community that uses blasters on the regular and see this as Just Another Apollo. Given the prices of other new blasters coming out this year, I’m going to put my money towards those instead (like the Nerf Regulator and Nemesis). Will it make a great gift though, for someone you know into Nerf? If they like Star Wars too, probably!

Key fact: I LOVED the Jango Fett blaster set… even though it was a single shot pistol there was enough different about the way it looked (and primed, to a degree) along with an agreeable price (at the time, it’s a collector’s item in its own right nowadays). All those factors, and I bought it. I would have liked a different shell, maybe a different priming mechanism… even a higher price for something that functioned like a Zeus but looked like Boba Fett’s blaster? SOMETHING a little more compelling, this doesn’t say it to me, unfortunately.
So this reveal has left me lukewarm. I like the colors, but knowing what’s on the horizon I couldn’t make this purchase myself. If you want to rep your favorite Bounty Hunter though with a projectile blaster and mask, and display it proudly with your other collectibles of note, you definitely have something here though, and something to look a little more the part if you need something (or some scoundrel) frozen in carbonite. I appreciate the inclusion from Nerf for this reveal, and like that they took the chance to make something for gamers and Battlefront fans, so let’s try again, please? And if you get this set, I hope you enjoy it! It’s just not for my collection, at least this time.
Affiliate links to follow (Amazon program):
//ws-na.amazon-adsystem.com/widgets/q?ServiceVersion=20070822&OneJS=1&Operation=GetAdHtml&MarketPlace=US&source=ac&ref=qf_sp_asin_til&ad_type=product_link&tracking_id=f03ec-20&marketplace=amazon&region=US&placement=B01CR8A0C0&asins=B01CR8A0C0&linkId=d54c4c1e169fb9be389b6fd1b3e27988&show_border=false&link_opens_in_new_window=true&price_color=333333&title_color=0066c0&bg_color=ffffff
//ws-na.amazon-adsystem.com/widgets/q?ServiceVersion=20070822&OneJS=1&Operation=GetAdHtml&MarketPlace=US&source=ac&ref=qf_sp_asin_til&ad_type=product_link&tracking_id=f03ec-20&marketplace=amazon&region=US&placement=B01CR8A0UW&asins=B01CR8A0UW&linkId=bbdce5722428971dc6b586d43ea9ccfc&show_border=false&link_opens_in_new_window=true&price_color=333333&title_color=0066c0&bg_color=ffffff
Nerf Apollo (Blue)