Skip to content
#ForceFriday Brings Licensed Blasters to the Front Lines
Vas The Stampede
ICYMI: Force Friday came and went, bringing with it a slew of new Star Wars toys to herald the revitalizing of the franchise when “The Force Awakens”  in theaters. I snagged a few pics on my instagram but here’s the official info and word from Nerf’s press releases (provided by the Nerf folks themselves, except for the lightsabers that I had to grab from ScienceFiction.com. I put a few darts through the blasters too, so there are some thoughts below as well. (All product was paid for on a shopping run, Nerf did not provide samples of these, just the information and images.)

“STAR WARS NERF FIRST ORDER STORMTROOPER BLASTER
(Ages 6 years & up/Approx. Retail Price: $12.99/Available: Fall 2015)
The fight to restore order to the galaxy comes home with the first-ever STAR WARS NERF blasters! Battle against the Resistance with this blaster that comes with a removable sight and three NERF darts that fire up to 65 feet!”
Simple enough; the blaster’s a single shot pistol, has a tactical rail on the top, and is easily pocketable. If you have a Firestrike already there’s not much new here, except it’s colored like the First Order Stormtroopers. The range claim is a bit high too, holding the blaster parallel to the ground achieved maybe 30-40′. Angled (VERY angled, as was the case with all these blasters) I was able to get maybe 50′. Good for close quarters but at $12.99 you might find other offerings for similar prices that have higher ranges.

“STAR WARS NERF CHEWBACCA BOWCASTER
(Ages 8 years & up/Approx. Retail Price: $24.99/Available: Fall 2015)
The fight to restore order to the galaxy comes home with the first-ever STAR WARS NERF blasters! Battle against the First Order in the style of your favorite Wookiee with this blaster that features a removable scope, real crossbow action and five NERF darts that fire up to 65 feet!”
This blaster… left a bit of a bad taste in my mouth. I didn’t own the other Chewbacca bowcaster from the 90s(?) so I was excited for it, even moreso because it seemed based on the Diamondista, which is one of my favorite blasters from the Rebelle line. However, this blaster was no Diamondista. It has a tactical rail (for a binocular style sight, included) and an ammo holder for the side. The ammo holder only installs on the one side though which is fine for me as a righty, but I wonder about left-handed users. The biggest complaint about this blaster is the size though, when you think Chewbacca you think a sizable two-handed blaster. The size on this blaster fit more for a pistol than the Bowcaster, at least in my mind.
The worst part of the blaster though, was how it shot. Licensed products in general worry me, and past licensed products of all types (video games, blasters, etc.) were terrible. And when the blaster fired, it fired fine. Angled it would hit 60+, around 30-40′ aimed parallel to the ground. BUT, the darts would sometimes spiral when they launched. And this misfire happened a lot more than I remember it happening with a Diamondista. Maybe it’s the dart quality, the weather, the phase of the moon but the reliability of this blaster firing was noticeably low. While the Diamondista is only $10 ($4.98 elsewhere) that’s an acceptable risk, but for a $25 blaster that carries the roleplay idea of one of the main heroes of a major franchise…. I expected better. This one I’d say wait for the sale.

STAR WARS NERF FIRST ORDER STORMTROOPER DELUXE BLASTER
(Ages 6 years & up/Approx. Retail Price: $39.99/Available: Fall 2015)
The fight to restore order to the galaxy comes home with the first-ever STAR WARS NERF blasters! Battle against the Resistance with this blaster that comes with a 12-dart clip, slam-fire action, removable sight, detachable stock and twelve NERF darts that fire up to 65 feet!
This blaster was up to my expectations. It comes with a 12 round magazine, tactical rail sight, and a detachable stock. Colored as the First Order Stormtroopers, the main weapon to fight the Resistance. Whether stormtroopers will shoot better this time around remains to be seen, but if they’re using streamlines I have a good feeling for the Resistance fighters. The blaster reminds me of the Alpha Trooper in the way it feels and shoots… which isn’t necessarily a good thing. The Elite Alpha Trooper’s pump felt a little flimsy for me, and would sometimes release the magazine I had in the blaster. It just didn’t feel like a very robust build and definitely not like the Rampage or Raider even. Some aesthetic touches such as the “armed” vents on the side are nice though. I am not sure how left-handed people are going to like using this blaster though, with the magwell and mag release buttons positioned only on the left side of the blaster. Also, the jam door is connected to the pump, so you can’t open it whenever. I don’t like that, but maybe it’s a small complaint. HOWEVER, the first one I bought broke using slam-fire and I had to return it for an exchange. So far the other one hasn’t had any issues, and fires pretty well.
Range-wise, the blaster hit maybe 40′ at least while aiming parallel to the ground, but definitely needed an angle to hit 60’+. Not surprised at that. Is it worth $40? Depends on how much you like Star Wars, need a slam-fire blaster, or…. like Star Wars? I took advantage of the promo price Toys R Us had, so I was fine with the price I paid for it. If you already have an Alpha Trooper or Rampage, you may want to pass. Personally I am still happy with it, as I always wanted a Stormtrooper blaster and am happy that dart shooters from Star Wars are finally out and hitting over 20-30′. If these do well, I look forward to more as the franchise expands. 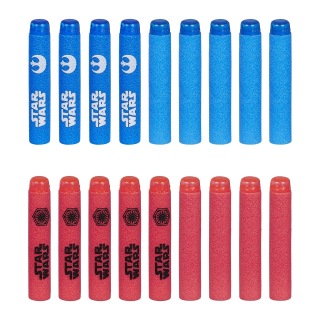 The dart heads are transparent! Not much to say, just additional dart types which are pretty nice. 18 darts for $9.99…. that’s…. uhm…. definitely not the price you get for other packs though. How much do you really want to shoot blue or red darts? 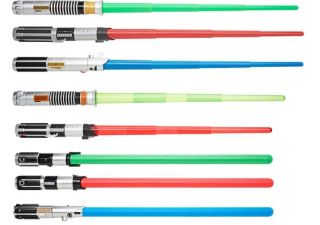 FINALLY! Lightsabers I can use for combat and not worry about bending/scuffing the plastic. The foam is more consistent with pool noodle foam though, and less the smooth foam used for the old N-Force line. The handles are hollowed out to use with connectors for the Blade Builder set, so you have options and configurations to choose from! For $14.99 you can definitely find cheaper foam swords, but they’re not lightsabers. I gladly paid the price for the aesthetics. And yes, you lose the light-up function and the hum of the sabers, but now you can duel with the best of them! (Which is NOT recommended for play.)