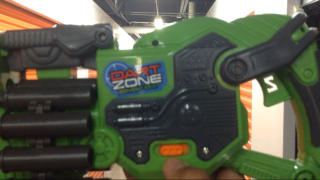 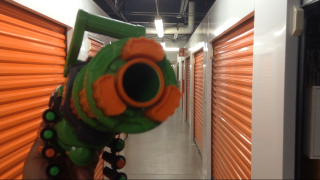 Prime Time Toys keeps the hits coming with one of their latest entries, the CovertOps Scorpion Gatling Blaster. A Wal-Mart Exclusive, this blaster is obviously inspired by some earlier similarly styled “gatling” blasters like the Punisher and Gatling Blaster. This fully automatic, 20 shot blaster proves itself a pretty good value for 20 bucks.

It requires 6 AA batteries, and that spins the barrel (purely cosmetic effect) and also powers the flywheels. There’s no accelerator trigger here, once you hit the “on” button the flywheels go and all you have to do is hold the trigger down. It’s pretty easy to shoot in bursts, or just empty the entire belt for maximum hilarity. The blaster is small, probably smaller than either of the earlier gatling blasters. This does make it a bit easier to carry and move quickly, although the chains do swing about, nothing new if you’ve ever run with a Nerf Vulcan. Unlike the Punisher, there is no ammo box, so there’s a loss in aesthetic as well. Oddly enough, while the line is called Covert Ops, once this blaster is on, there is nothing covert about it. If you didn’t like the noise level of a Barricade, you will definitely not like this blaster. As I suggest with any of those complaints, just wait until you’re about to shoot and flick the power switch then, don’t run around an entire game or scenario with your flywheels running (unless there’s a strategic reason for it, as I’ve done in the past).

The Covert Ops line is a green and orange mash of colors, crossing toy safety and a color scheme reminiscent of the movie, “Predator.” While this isn’t the total minigun that some folks may want, it does pretty well all the same. To me, the plastic and build feels pretty sturdy and that it might take a drop or 2. That is only descriptive of the blaster body, though. I can’t attest to the strength of the electronics and the motor if you dropped this blaster. Bottom line, it feels solid.

I repeat, the size proves deceptive as you might not expect the power you get out of this. I was able to hit almost 50′ flat and angled my shots hit about the advertised 70′ range. And this was with both the proprietary “super” darts and other leading brand darts. This blaster shot just about anything I put in the ammo belts. The accuracy did leave something to be desired, but with foam ammo that tends to just be the reality of the medium. And if you’re sending out about 20 shots at a time, maybe accuracy isn’t your main concern!

That being said, I can’t comment if chains from the earlier gatling blasters will work with the Scorpion, as I don’t have either. And if I had any real complaint about this blaster, it’s that additional chains aren’t available to use this as a proper defensive or offensive weapon. Extra chains and the fast reload (with some practice and preloaded chains) would make for a good time in a stock blaster game. As far as I know, separate chains are not sold anywhere so you have one 20 shot belt and that’s it with the Scorpion. Either check your fire or get ready to reload the same chain frequently. For $20 and only 6 AA batteries, I definitely think this blaster is worth the trip to a Wal-Mart (in the US) and adding to your inventory. It’s a great price for a 20 shot blaster that hits its range and fires pretty quickly.

Thanks so much to Prime Time Toys for the sample, and to you for reading! If there’s anything I missed feel free to use the contact form or make a comment below (comments are moderated, so they may not appear right away.