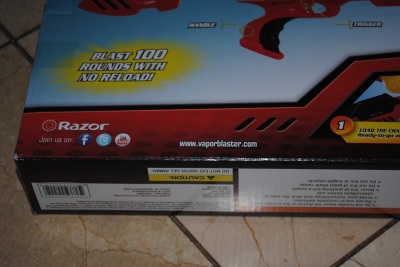 What we’re looking at here is the Vapor Delta 500.  500 because that’s the amount of water-based “gel-ammo” the blaster comes with.  It’s the 2nd entry in the Vapor line from Razor, and thanks to them I received a sample to take a look at.

The second model in the new line of Vapor gel ammo blasters developed by Razor USA LLC, the Vapor Delta 500 is the big daddy! Lock, load and shoot up to 100 rounds of Vapor Gel Ammo without reloading. The rifle-like blaster features real trigger action and long-range firing up to 80 feet. It comes with 500 rounds of ready-to-go Vapor Gel Ammo for the ultimate battle. No mess, no fuss, just blast away – you never have to retrieve the Vapor Gel Ammo, just let it evaporate.
Product features include:
Ages: 14+
MSRP: $19.99 (EDIT:  This was older information and has since changed; the MSRP is now $24.99)
Availability: Spring 2012
And now for my take-
It is a COMFORTABLE blaster.  I prefer to leave the stock on, and it is a pump-action blaster.  Unlike the other gel-ammo system out there, this (like the Atlas) has a TRIGGER, but it also fires way more reliably than my experience using an Xground Pounder or Xranger.  Not to mention sturdy.  The spring feels pretty beefy inside the pump, and the ranges on the Delta itself can hit up to 80′ angled, but more reliably and closer to 50′ when fired parallel.  Still though, pretty good for something right outta the box.  And it HOLDS 100 rounds of ammo per reload!  That it fires RELIABLY.  Sure the other type might hold a lot more, but those rounds don’t always make it out of the barrel, nor do they fly as straight.  The pump-action is smooth, and the trigger pulls nicely.  It doesn’t hurt after shooting for an extended period of time.
As advertised, the ammo breaks apart and dries up and disappears, so it’s good for one time only.  No dart sweeps in this case, but you do have to keep buying refills, available at Razor.com.  100 shots really does go a long way though, but it really depends on your play style how long the ammo lasts.  You really would be held to how much ammo you bring to a game, as you can’t pick up anything off the ground like you would during a foam dart tag game.  You run out, that’s it.  But 100 shots is more than you think, over the course of a couple rounds of capture the flag I refilled only once and I had at least 500 rounds of ammo.  At most during a rush I fired 20-30 times, and that is a generous guess.  They’re looking for Spring to do a full release in-stores.  This is by and large a HUGE step above the Atlas.   Good range, real tight clusters of accuracy, and the pump-action is infinitely more reliable than any other water pellet system out there.  This is truly a great experience right out of the box and for $19.99 $24.99, the price is (STILL) on par if not better than most other toys out there factoring in for reliability and convenience.  Seriously, when these are available in the spring, look for them.  If they’re not at your stores already, ask for them to carry them!  Sure the ammo isn’t reusable, but considering the attrition one runs into with darts that become weathered, chewed, flattened, torn apart, or stomped, I find myself having to buy darts aren’t limitless either.


Keep your eyes open, the Vapor Delta 500 is definitely something to watch out for after Toy Fair!

+ 100 shots PER reload
+ Comfy and ergonomic
+ Comes with 500 rounds
+ Sling attach point is in a very good place, blaster sits right at hip
+ Pump-action
+ IT HAS A TRIGGER.

– Stock’s a bit short
– The rail doesn’t QUITE fit other brand accessories
… yeah, that’s about all I got.


Now, for some video!