Man!  Here we go with what’s out and my thoughts on some blasters currently out there on the market to give people a heads up on what to think about when looking for a toy for your kid.  As I work mostly out of pocket, I can’t provide an opinion on EVERYTHING, but I’ll do what I can.  As Nerf’s been one of the more forthcoming companies providing samples and info, here they are.

2011 was HUGE for Nerf.  They released something for all their current lines:  Dart Tag, N-Force, N-Strike, and their newest addition to the Nerf blaster family, the Vortex.

Nerf Dart Tag used new blasters in their tournament this past summer, and the line got a revamp.  The Swarmfire, Quick 16, Sharp Shot, and Speedload 6 are what the Dart Tag line looks like now, and they’re all pretty good additions.  Quick note: STREAMLINES DO NOT FUNCTION IN DART TAG BLASTERS.  THEY DO NOT FIT THE BARRELS PROPERLY.

The Swarmfire is a battery-operated turret blaster, loaded up to 20 darts at max capacity.  It was surprisingly strong right out of the box, definitely on the high end of the 30′ you could estimate for ranges on this blaster.  While reload is a pain in the butt, the rate of fire and range balance it out.  You can find it for $29.99 at most retailers.  It comes with ammo, removable stock, and runs on 6 “C” batteries (not included.)  It can fire pretty much any type of dart, but streamlines I’ve seen have the worst performance. 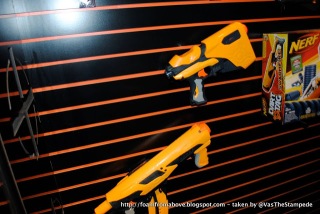 The Quick 16 is my favorite blaster of the Dart Tag line.  I’d already done a review of this blaster earlier, for your reference here it is:  FOAM FROM ABOVE – QUICK 16!
$19.99 at most retailers, and between the ergomonics and the solid construction, is a fine gift.

The Speedload 6 is what you could say is mid-level blaster, having only 6 shots before emptying.  At $12.99 is not a bad price, but considering you get similar ranges and 7 more dollars will get you 10 more shots per reload it’s a toss up which blaster you want to get.  Ultimately what it boils down to is whether you like the slide priming mech on the back like a Nerf N-Strike Recon, or the foregrip/slam-fire action like an N-Strike Alpha Trooper or Raider.  Depending on your preference, that should determine your final decision.  I like the Speedload’s heft, but it is definitely a tough blaster to holster and use as a sidearm.

The Sharp Shot is the pistol-type blaster of the Dart Tag line.  Not much to report, it’s a single-shot blaster that has a slide on the back of he blaster you use to prime it.  It comes with 3 darts, and costs $7.99.  If you’ve seen one pistol, don’t expect too much different out of this.

There are some additional bells and whistles, like individually sold eye protection vision gear in orange, black, and white at $4.99, and a separate “official” jersey just like you’ve seen in the Nerf Dart Tag League videos and commercials, for $15.99.

A good start so you can purchase though is the two-player starter for $29.99.  It comes with darts, two Sharp Shots, two pairs of vision gear, and a couple of dart tag jerseys (different from the ones sold separately).  If your kid’s looking for a friend to play with, this is a good way to have supplies to get started!

My favorite thing about the Dart Tag line in general is the reloading mech.  Some people really don’t like it, preferring the fast-reload of the N-Strike clips when under fire.  I found once you get the knack for it, using the integrated clips on the Speedload or Quick 16 is just as effective, especially since it eliminates fumbling with extra pouches to accommodate additional clips.  Keep feeding your clip a steady stream of darts between bursts and all you need is to carry your blaster and your ammo.  The Swarmfire does have its reload-on-the-fly issues being a turreted blaster, but the ranges are amazingly good right out of the box.  Angled, I was surprising a good number of people who used modded blasters.  For what they were priced, I was pretty satisfied with what I got.  Happy hunting!