Fresh from the folks at K’Nex, they’re looking for members of the K-Force! Do you have what it takes? See the announcement below: 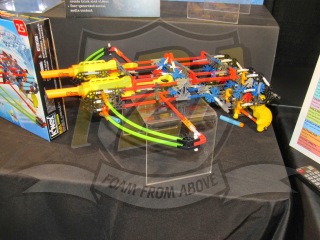 Hatfield, PA – March, 2015 – K’NEX, the only US construction toy company focused on Building Worlds Kids Love®, is seeking 20 enthusiastic blaster fans to join its K-FORCE Squad! The members of the squad will be the first to get their hands on the new K- FORCE Build and Blast(TM) line; the only line of blasters that you build then blast!
The K-FORCE Build and Blast line invites kids ages 8+ to construct customized blasters, big or small, single or multi-shot, with endless possibilities — the only limit is your imagination! The introductory line includes 8 different kinds of blasters, buildable targets, and foam dart packs.

The nationwide search runs through March 22, 2015 and challenges blaster fans ages 13+ to submit a video, up to 60 seconds in length, explaining why they deserve to be chosen as a member of the K-FORCE Squad. The first 1,000 video entries received will be reviewed by a panel of K’NEX judges, and 20 K-FORCE Squad members will be chosen from among those entries.
Upon confirmation of eligibility, the 20 K-FORCE Squad members will each receive exclusive access to the K-FORCE Build and Blast product line before it hits store shelves, and a chance to become the Grand Prize winner. All the Squad members have to do is build one or more K-FORCE blasters using the K-FORCE products they receive (and any other genuine K’NEX parts they may already have at home), and then create a short video that shows the Squad member using the blaster(s) he or she created to execute his or her best “trick shot”.
K-FORCE Squad members will be required to submit their video to K’NEX by May 8, 2015 and, upon review and confirmation of qualification, will be asked to post their Best Trick Shot Video to YouTube by May 15, 2015. These videos will then be featured on the K’NEX Facebook page, and the public will be given the opportunity to vote for their favorite video. The K-FORCE Squad member whose video receives the most votes will be awarded the Grand Prize, a $500 shopping spree on knex.com, and a GoPro HERO4 Camera.